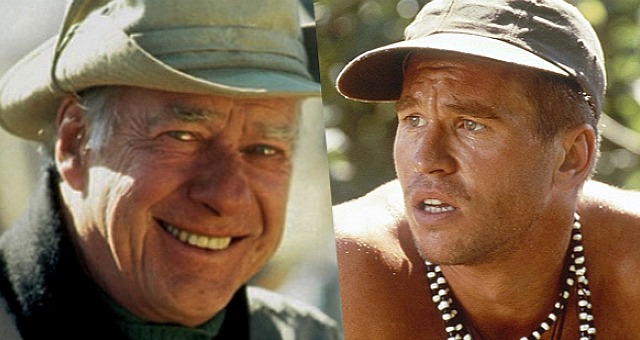 Frankenheimer: The man was Nosferatu! He’s alienated every director he’s worked with.

Lurie: He was in the mid ’90s, okay. He might have been the worst prick in the history of Hollywood on Dr. Moreau, but he took a lot of heat for that. Everyone was calling him “Psycho Kilmer.”

Frankenheimer (frowning): I helped you along in this business, Rod. I mentored your ass and you can’t promise me this one thing?

Lurie: And I respect you too much to make a promise I may not keep.

Lurie: And what’s it to you anyway? You hated working with him, okay. Others have felt the same way, fine. But people adapt and change and whatnot, and I might decide down the line that Kilmer is really right for a part. What do you care? You won’t be around.

Frankenheimer: I’ll be looking down on you, Rod, and I want the satisfaction of knowing that a friend of mine has kept his distance from one of the worst all-time motherfuckers.

Lurie: That’s not a very celestial or compassionate view of the human condition, John. You’re about to push into the great cosmic beyond, but I have a career to steer through rough, choppy seas. A career that may last for decades…who knows?

Frankenheimer (sulking): I see. I thought you were Fred Amiel, but you’re Jonathan Shields.

Lurie: Every director steers his own course for his own reasons. You were friends with Frank Sinatra, and what did he sing? “For what is a man, what has he got? If not himself, then he has not.”

Frankenheimer: You disappoint me, sir.

Frankenheimer: I changed my mind. You should work with Kilmer after all. You guys’ll get along.

Lurie: I’m not saying I’ll work with Kilmer, or that I want to as we speak. I respect what you went through and realize that you’re looking out for me. I get it. I’m just saying that some day I might have a different view. Who knows?

Frankenheimer: I think it might be better if you left now.

Lurie: Can you just answer…

Lurie: Who are you to tell me who to work with and who not to work with? You made your own calls all your life, and went your own way. You were close with Sinatra and you loved Bobby Kennedy, and then you had a bad time with Kilmer, okay. But I’m making my own decisions about who I’ll work with. I’m sorry. I love you and I…uhm.