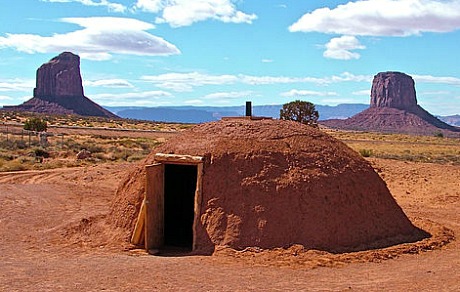 The general vibe was “We don’t do this…people don’t just drop by to check our place out and you’re the very first to do this in the history of the Firetree Inn” — the guy actually said this to me in a subsequent e-mail — “and this is a place of tradition and spiritual worship in a sense, but first and foremost the Firetree Inn is about us…about what we want…and we don’t like people just dropping by before 5 pm.”

An hour later I was back at Goulding’s and writing the Firetree guys and asking if they could find it in their hearts to please refund the $200 and change that I’d sent them in advance. “You didn’t like me dropping by,” I wrote, ” and I didn’t like that you didn’t like this. So let’s agree to dislike each other. This happens occasionally. Not everything is a fit. You’re okay, I’m okay, we’re all okay. Peace?” They agreed and sent the refund immediately.

I’ll be staying this evening at the San Juan Inn in Mexican Hat.