You’d think that L.A. Times film critic Kenneth Turan might be …how to put it?…partial to slipping on the kid gloves in reviewing The Soloist? Since it’s at least partly an L.A. Times milieu story based on a book by a Times colleague, Steve Lopez, about a relationship he had/has with a gifted but schizophrenic street musician? Uhn, nope. 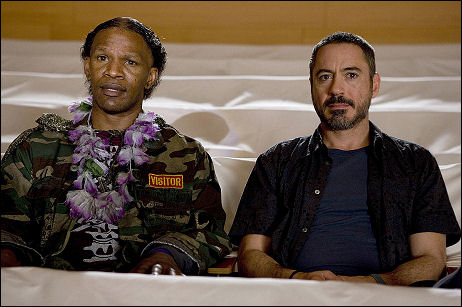 “Remember when Lloyd Bentsen told Dan Quayle, ‘I knew Jack Kennedy [and] Senator, you’re no Jack Kennedy’?,” Turan begins. “Well, I felt a little that way when it came to reviewing The Soloist

“Despite all I know I should feel, I can’t help being mightily frustrated by [this film]. I can’t help resenting that it suffered the death of a thousand cuts and, more frustrating still, that all this happened in the name of doing good in the world, of making the story’s powerful lessons more palatable to a wider audience.

“But by consistently and relentlessly overplaying everything, by settling for standard easy emotions when singular and heartfelt was called for, by pushing forward when they should have pulled back, director Joe Wright and screenwriter Susannah Grant have made the story mean less, not more. Instead of enhancing The Soloist‘s appeal, they have come close to eliminating it.

“I could back up and write all this in the reviewer’s traditional third person, but that feels disingenuous. After all, I do know Lopez, whose wonderful Los Angeles Times columns and later book about his unlikely friendship with a gifted but deeply troubled street musician started everything. And I work with Lopez at The Times, which, in an unprecedented gesture, offered its newsroom as a set and has in general bound itself to this movie with remarkable fealty.

“More than that, as a Washington Post reporter when All the President’s Men came out, I’ve experienced working at a newspaper when its exploits became movie material. I know what to expect from this kind of wild ride and, just as important, what to disregard.

“So while it was initially jolting to see the tall, laconic Lopez portrayed by Robert Downey Jr. — not the likeliest person to play him — as a short, voluble bundle of energy, I got over it. Did Marlon Brando resemble Napoleon? Did John Wayne look anything like Genghis Khan? Time to move on.

“I also knew we were a long way from the early days of the movie business, when Hollywood ran roughshod over books, ending an early sound version of Moby-Dick, for instance, with Ahab killing the whale and coming home to his girlfriend. Really.

“If The Soloist had been made in those days, Jamie Foxx‘s Nathaniel Anthony Ayers, a gifted musician battling the horrors of paranoid schizophrenia, would have been cured in a trice and ended up playing a gala concert to a Disney Hall standing ovation. So I am nothing if not grateful for the small favors this film provides.

“[And yet] director Wright seems to relish overdoing whatever he can, not surprising for those who remember how he treated the Bennett family in his Pride & Prejudice. So a cellist who tries to help Ayers can’t be just a good person, he has to be clumsily religious. When Ayers gets to hear a concert in Disney Hall, we can’t just experience the moment, we have to watch a psychedelic light show left over from the Jefferson Airplane playing the Fillmore.

“And we can’t simply enjoy this story for what it is, we have to suffer through bogus and unnecessary slapstick moments like Lopez slipping on his own urine during a hospital visit.”