I’ve tried for nearly an hour to find an online PDF of Wendell Mayes‘ script for Go Tell The Spartans, or a transcript of the film’s dialogue — same difference. I’m in love with a soliloquy spoken by Burt Lancaster, playing Major Asa Barber, as he tells a young soldier (played, I think, by Craig Wasson) why he’d been demoted from the rank of Colonel a few years back. 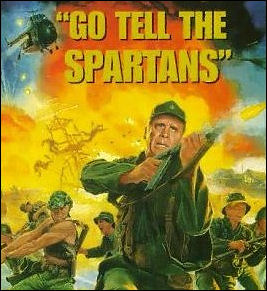 Lancaster/Barber was stationed near Washington, D.C, he recalls, and having an affair with his commander’s wife. Some months passed and then a party was given by this commander at his Virginia suburb home — a very special dinner party that the U.S. President was expected to attend.

“Sometime late in the evening I quietly slipped out to meet the commander’s wife in a backyard gazebo,” Lancaster says (although this is strictly from memory). “I was in love with her and she with me, and this naturally led to certain acts of worship and affection. She dropped to her knees and began making love to me, orally.

“You sometimes lose track of time during such moments, but I know that suddenly I heard someone clear his throat. I looked up and realized we were being watched. It was fairly dark but there at the top of the gazebo steps stood my commander…”

“And next to him, the President…”

“That’s right — the President of the United States.”

“I did what any soldier does in the presence of a superior officer,” Lancaster replies. “I saluted.”

This scene somehow takes on an added quality when you mash it together with that Ernest Lehman story about his first encounter with Lancaster while visiting the Beverly Hills offices of Hecht-Hill-Lancaster.

If anyone can find the original Mayes script, a transcript of the film or, better yet, a video clip of this scene, please send along.