I loved Joe Mantegna and particularly Ron Silver as production execs Bobby Gould and Charlie Fox in the 1988 B’way production of David Mamet‘s Speed-the-Plow, but (this may sound like blather but screw it) I was charmed, aroused and finally knocked flat last night by Jon Tenney (Kyra Sedgwick‘s boyfriend in TNT’s The Closer) and Greg Germann (Talladega Nights, Friends With Money) as they played the same roles in the current Geffen Playhouse production. 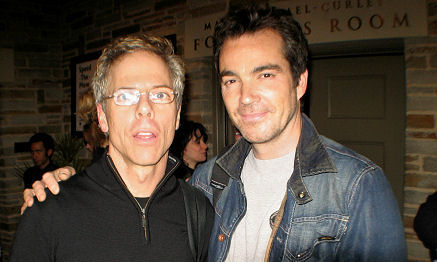 Tenney and Germann, real-life single dads and off-stage pals, have a preternatural rhythm going with Mamet’s dialogue that feels like fusion jazz. It seemed faster and more agreeably manic than Mantegna and Silver’s back-and-forth, and definitely funnier. (Germann’s hyper physicality is a constant hoot.) I went to the play with a guarded attitude, having enjoyed but not quite loved the ’88 version. In part because Plow is engaging but not really first-tier Mamet, and because of the after-effect of Madonna’s tolerable-but-far-from-great performance. But the hilarity came through in spades last night, and I left with a different attitude.

My favorite Germann performance before this was the computer geek in ’94’s Clear and Present Danger…no longer. I haven’t seen much of Tenney because I barely watch the tube, but last night was a wake-up.

Calling Alicia Silverstone‘s performance as “Karen” — the office temp who temporarily sidetracks the power-hungry Gould into wanting to make a movie about radiation and the end of the world — better than Madonna’s sounds like damnation with faint praise, so let’s say she’s quite good — snappy, emotionally in tune, alive in the moment — by any yardstick you want to use. (The only weird thing is that she was wearing stockings under jeans in the second scene of Act One.) 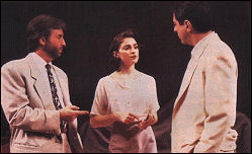 Silver, Madonna and Mantegna in ’88 production

There was a q & a with director Randall Arney during an after-party following the show, and the moderator started things off by asking if Speed-the-Plow was a comedy or a tragedy. “David feels it’s a comedy,” said Arney. “A comedy about the end of the world.” No good work is one thing or another, of course. Here’s the great Peter Ustinov explaining his feelings about how all mature dramas and comedies are always a blend of high and low, darkness and light.