“The movies haven’t been very good the last three or four years, they really haven’t,” author/screenwriter/director Michael Tolkin tells N.Y. Times profiler David Halbfinger. “Everybody knows that. At least that, maybe more. And what [movies] were will never return. 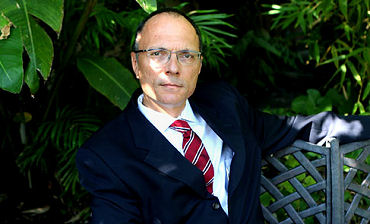 “I don’t think America’s had a good [big] movie made since Abu Ghraib,” Tolkin continues. “I think [that Iraqi prison-torture scandal] showed that a generation that had been raised on those heroic movies was torturing. National myths die, I don’t think they return. And our national myth is finished, except in a kind of belligerent way.”
Tolkin sat for this interview, which was published on Wednesday, 8.30, to plug his new book, “The Return of The Player” (Grove, 8.28).
I’ve been calling Tolkin and runnning into him at parties and various industry fuctions off and on for 14 or 15 years. He’s a good guy to know, although every now and then he can be cautious to the point of being a flatliner.
Tolkin has a very sardonic sense of humor. He’s the funniest down-head I’ve ever met in this town. There was a line in Deep Impact when the astronauts have just committed themsleves to a sucide move that will save the earth, and one of them says, “Well, at least we’ll all have junior high schools named after us” — that’s a Tolkin line.
And never let it be forgotten that Tolkin directed and wrote one of the scariest and eeriest films made in the last 20 years, as well as the most damning film ever made about born-again Christians who believe in the End of Days — The Rapture (1991).
“The source of [Tolkin’s] creative-industrial-complex angst,” Halbfinger writes, “is the death of what he both eulogizes and parodies: the classic journey-of-the- hero story structure, analyzed by Joseph Campbell in the 1940’s, popularized a generation ago by George Lucas through Star Wars , spouted and shorthanded by studio executives ever since, and all but trampled to death, Mr. Tolkin said, by nearly every subsequent action movie and thriller that Hollywood has turned out.
“Or, as Tolkin’s Griffin Mill puts it in the new book: “Physics cracked the atom, biology cracked the genome and Hollywood cracked the story.”