I’ve been a Marvel Cinematic Universe skeptic for several years now. I’m not a confirmed hater because of Joe Johnston‘s Captain America (’11), Peyton Reed‘s Ant Man (’15) and Anthony and Joe Russo‘s Avengers: Endgame (’19), all of which I was down with. But otherwise the MCU has been darkening my brow for some time, and until recently the second Spider-Man reboot, in particular, rubbed me the wrong way.

Five years ago I posted an angry rant about the then-forthcoming Spider-Man: Homecoming, the first Tom Halland reboot. “I don’t want to see this,” I kvetched and moaned. “I really, really don’t. Who’s with me? That was a joke. The studios crank out another and the herd comes right over and starts slurping. I’ve loved a few Marvel flicks, okay, but c’mon, man…enough.”

Two years later (i.e., early 2019) I wrote how turned off I was by the prospect of sitting through Spider-Man: Far From Home. “Sending a superhero to Europe to liven things up, needless to point out, is a sure sign of franchise fatigue,” I declared. “The idea of Hydron, lord of the waters, wreaking CG havoc upon poor Venice, Italy…to paraphrase Frank Gorshin‘s version of Kirk Douglas, the very idea makes me sick to my stomach.”

Roughly two months ago I turned up the volume. “I hate everyone and everything connected to Spider-Man No Way Home,” I wrote. “Okay, I don’t really mean that. I hope the film makes money and those who like to sit through this crap will feel satisfied or at least placated. But if I could erase the Spider-Man cinematic universe from everyone’s consciousness by clapping my hands three times, I would definitely clap my hands three times. Maybe that means I do hate everything connected to it.” 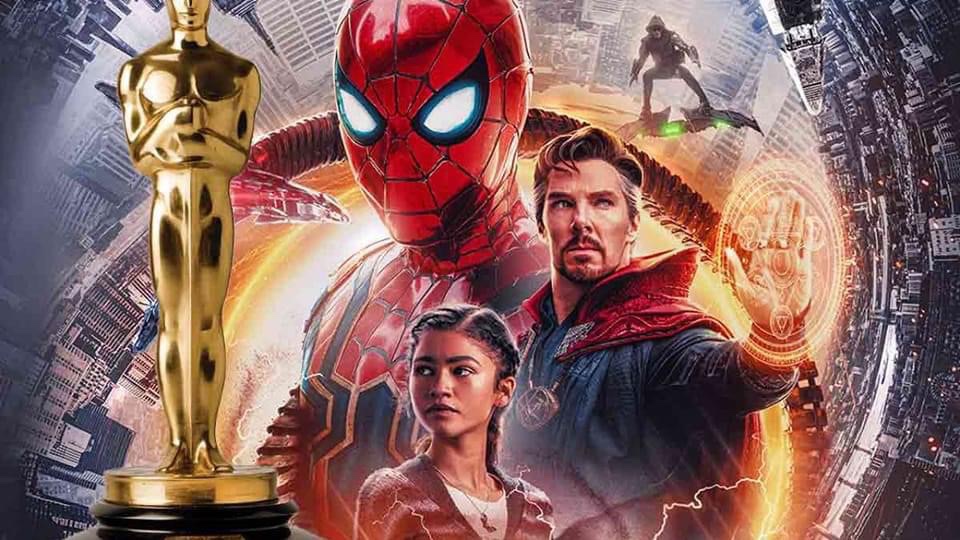 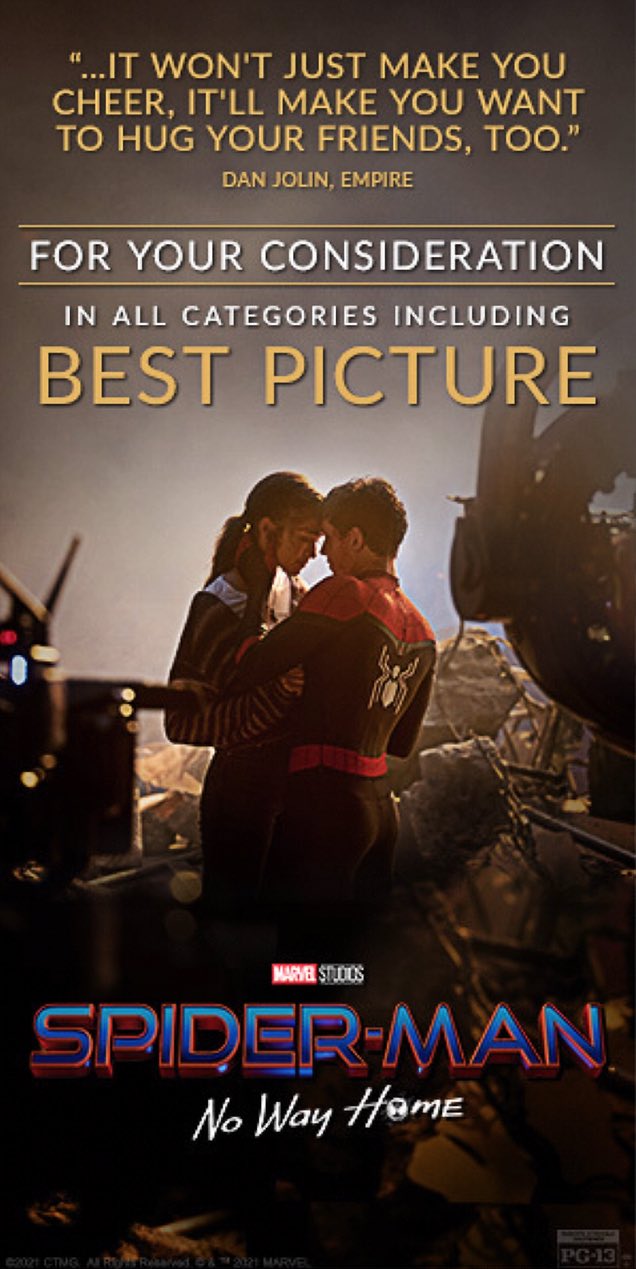 And then, as Joseph Heller once wrote, something happened.

On Thursday, 12.16 I caught a 7 pm showing of Spider-Man No Way Home at the AMC Grove. A couple of hours later I was shocked to admit that my concerns about Jon Watts, Chris McKenna and Erik Sommers‘ film were unfounded.

I’m not saying I was 100% delighted with the first half of it. But a tiny bit later everything started to change and advance and coagulate, and the trippier, hall-of-mirrors aspects of the “multiverse” plot started to kick in, and the movie got quieter and more reflective and then joyful…the crowd broke out in cheers three times…and I was suddenly going “holy shit, this is really working!”

I drove home in a state of pleasant disorientation. At 10:45 pm I tapped out two surprising statements. I wanted to sound cool and dry and circumspect, but I couldn’t stop myself.

(1) “Unlikely as this may sound, it is HE’s conviction that McKenna and Sommers’ SM:NWH script has resulted in one of the most cosmically out-there meta-Marvel experiences ever, not exactly logical but one of the most emotional Marvel sink-ins (and that includes Avengers: Endgame).”

(2) “As much as I hate to admit this, Spider-Man: No Way Home is easily one of 2021’s best films. It actually should be nominated for Best Picture because it turns the proverbial magic key — it turns audiences on. I was there and I felt it, dammit. This is what people go to the movies for. It even ends a little bit like Warren Beatty‘s Heaven Can Wait…almost. I’m sorry but the last 45 to 50 minutes are really good. I was totally sold. Call me flabbergasted. At the finish, everyone applauded.”

In other words (and I’m sorry for using eight paragraphs to get to this point), the fact that a skeptic and an in-and-out hater and sour-attitude guy like myself…the fact that I pretty much melted down and dropped to my knees in praise of the second half of Spider-Man: No Way Home and am now sincerely urging that the Academy nominate it for Best Picture Oscar…well, this means something. It really does.

I’ve been watching movies professionally and taking the pulse of this industry for more decades than I’d care to admit to, and I know what it feels like when a film connects…when it hits that sweet spot and lifts the spirits of an audience and injects a feeling that is rare and special.  It happened to me on 12.16.21, and it’s been happening to tens of millions of ticket-buyers since Spider-Man: No Way Home opened. It’s now the sixth-highest-grossing film in history in North America, and has taken in over $1.5 billion worldwide. 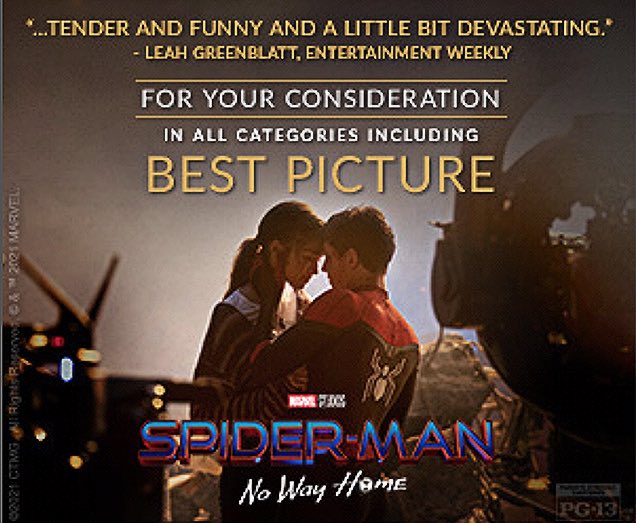 Does this mean Spider-Man: No Way Home deserves a Best Picture nomination for profits alone? Because it’s earning a phenomenal amount of theatrical revenue at a time when the future of theatrical is in doubt worldwide, especially with the latest Covid assault making things all the more difficult for theatres to stay afloat? No, I wouldn’t say that.

But the emotional feeling that led to this wild box-office tsunami…the spiritual surge that resulted in this astonishing popularity does merit a Best Picture nomination, mainly because no other 2021 film has come close to creating it.

And here’s what that vibe, that surge, that feeling is actually about. Sappy as it may sound, the second half of Spider-Man: No Way Home is about forgiveness and family. Has there every been a superhero film in which the protagonist tries to release the villains from their rotten karma and give them a second chance? Not to my recollection. And when have the blessings of family felt more welcome and tangible — the saga of a young adult whose difficult struggle is aided and soothed by the arrival of two uncles?

Before I began writing this I was telling myself there are two family films in 2021 Best Picture contention — Belfast and King Richard. It was only when I was halfway through this essay that the truth hit me — Spider-Man: No Way Home makes for a third, and it offers the warmest family embrace of all. And that‘s why it’s a Best Picture contender, you bet. Ask any non-cynic (i.e., not David Poland) who’s seen it. The proof is in the pudding.

January 11, 2022by Jeffrey WellsNo Comments
« Previous post
Again — Chappelle Is The Only Choice
Next post »
Most Depressing Recap of All Time