You can respond to Fantastic Mr. Fox as an auteurist thing — a dazzling and charming representation of the mind and spirit and stylistic exactitude of director Wes Anderson — and as a movie you pay to see with an $8 tub of popcorn in your lap. I responded to it both ways — in effect with two heads. Which left me feeling great and not-so-great. 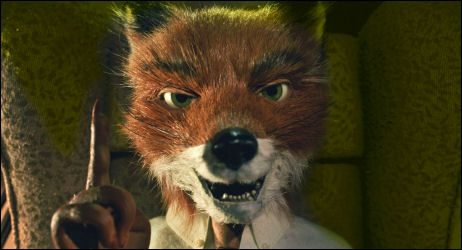 I loved and worshipped the auteurist aspect — the luscious autumnal colors, the every-other-frame movement that Anderson and his team used to create Fox’s particular stop-motion look, the “moving” fox hair that resulted from this, the deadpan Anderson humor, Mr. Fox’s courdoroy wardrobe, the tasteful pop-tune soundtrack (Brian Wilson‘s “Heroes and Villains,” “The Ballad of Davy Crockett”) and all the other typical Andersonian goodies. But I was unmoved and even disappointed by the campfire movie aspect.

The fact that 95% or 96% of the paying public will be responding to the latter and not caring all that much about the former (despite the fact that the elites — guys like Kent Jones, Village Voice critic Scott Foundas, New York‘s David Edelstein and New Yorker critic/columnist Richard Brody, among several others — are tickled with delight) may result in a commercial problem for 20th Century Fox, the distributor.

Edelstein calls it “a dandy’s movie,” and that it is. Which, as noted, is what gives my inner movie dweeb such pleasure. I intend to buy, watch and occasionally re-watch the Fantastic Mr. Fox Bluray when it comes out next year. But most American moviegoers are not dandies. They’re slugs and lugs, and I know, trust me, what’s going to happen when they watch it on screens this weekend.

It’ll be the same reaction I was sensing from the swells last month during the London Film Festival premiere in Leicester Square. During the early stages they’re going to go “yeah, yeah, this is glorious, really good, immaculate craft, wonderful colors and details” and so on, but somewhere around the 45- or 60-minute mark they’re going to begin saying to themselves, “Wait a minute, what is this? Nothing’s happening. It’s staying on the same level.” 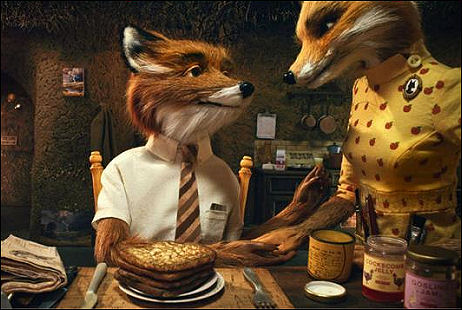 The bottom-line thematic truth about Fantastic Mr. Fox is that it’s about as deep as a Road Runner cartoon. It’s all about how it looks and sounds and how they made it, and nothing about what it actually is. It’s pure Wes, pure whimsy, pure style, pure technique, pure stone-skimming-across-the pond. I get it and I love it, but my inner meathead was saying “yeah, and so what?”

Based on the Roald Dahl children’s book, Fantastic Mr. Fox is about the troubles and turmoils that befall a sophisticated adult fox (George Clooney‘s Mr. Fox) and his family (Meryl Streep, Jason Schartzman) when he decides that a life as a gentleman newspaper columnist isn’t enough — he must revert to raiding coops and eating chickens.

Mr. Fox and and his opossum friend Kylie (Wally Wolodarsky) decide to raid the farms and warehouses of three ruthless agribusiness types — Boggis, Bunce and Bean (Michael Gambon). The story is basically about Fox and friends enjoying the upper hand against these three, and then Boggis, Bunce and Bean striking back with machine guns and John Deere super-diggers and whatnot, and then the Fox clan figuring some way around their latest maneuver, etc.

Except it’s not “real.” The immutable laws of probability and outcome don’t apply. No foxes get killed despite ridiculous automatic-weapons odds against them. (It’s a little bit like Sylvester Stallone never being winged in Rambo II.) Life can sometimes be brutal in actuality and sometimes very tough decisions have to be made, and sometimes people stumble and fall and die and go to jail, but in Fantastic Mr. Fox life is an ironic bullshit thing…a hip romp…a lightweight goof.

Mr. Fox is chicken-raiding behind the back of Mrs. Fox (Streep) as he’s promised her he won’t attack and slaughter any more, despite the fact that he and Mrs. Fox are shown doing a chicken-raid in the opening scene. Presumably Mr. Fox collects a handsome salary as a newspaper columnist (enough to afford a nice home inside a big tree) and when it comes to vittles he and Mrs. Fox presumably go to a fox supermarket to buy frozen chicken paties. The main point is that hunting is out.

Except none of this is explained or explored, and it struck me as more than a little bit wacko. The common lore of foxes is that of chicken-coop raiders — it’s what they do. (They actually hunt and eat rodents, snakes, you name it. They eat about 2 pounds of food each day.) So what kind of screwy-headed fox wife tells her fox husband that he has to give up chickens, like he’s some kind of alcohol or gambling or oxycontin addict? I don’t get it. In fact, I reject it. It’s just not a very persuasive or compelling story.

I mean, what’s the metaphor here? That it’s cool to be a thief, or that thieves have to be true to their natures? That it’s good to have family and friends to help you steal chickens and apple cider? I didn’t hate the story but what is it? Nothing, really.

In short the Fantastic Mr. Fox style is great to savor in dozens of aesthetic ways, as noted, but in rudimentary terms it’s just a mild-mannered outdoor Anderson picnic. It’s Clooney having fun portraying a canny, urbane, ethically-challenged fox and Schwartzman doing his usual young-neurotic guy, nobody-values-me shtick. And Murray being glib and cool. And Owen Wilson coming in for a brief cameo, and Anderson voicing a weasel, and Willem Dafoe playing a rat. 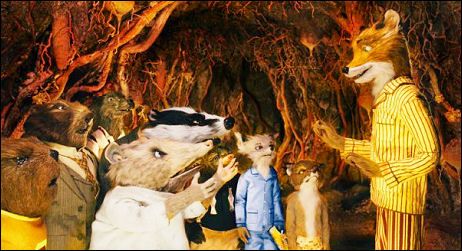 Compare the whimsy in Fantastic Mr. Fox to the rich thematic delivery in WALL*E or Up or The Incredibles, and you’re talking about a very minor thing. I’m sorry but the Anderson decline continues. I want that old Bottle Rocket/Rushmore current back. And if I can’t have that I want more than just dandified style. I want Wes to remake Jean Luc Godard’s Weekend, or make some kind of 21st Century film noir or….I don’t know but some kind of bold-swan-dive-into-fresh-territory type of film.

Honestly — if Fantastic Mr. Fox wasn’t directed by Anderson and didn’t feature the voices of Clooney, Streep, Schwratzman and Bill Murray (playing a badger), would anyone be paying attention to a film like this at all? I wonder.

And yet I love the way it’s all been done. It’s a huge kick on that level. Really. So if you can watch it from that inner sanctum and stay there and keep yourself from slipping into a sweaty and bothered state after the 45-minute mark (like me), you’ll have a very cool time with it. And you can meet Kent Jones and David Edelstein and Scott Foundas and Richard Brody for drinks afterwards. Cool all around. Movie happiness is where you find it.