Every year there are always one or two Cannes market screenings worth catching. I’ve been hoping all along that Sylvester Stallone‘s The Expendables would turn up in this fashion, but with no announcement so far I guess not. So the one to see, I suppose, is Taylor Hackford‘s Love Ranch, which will screen on Saturday (along with four or five other must-sees that day). 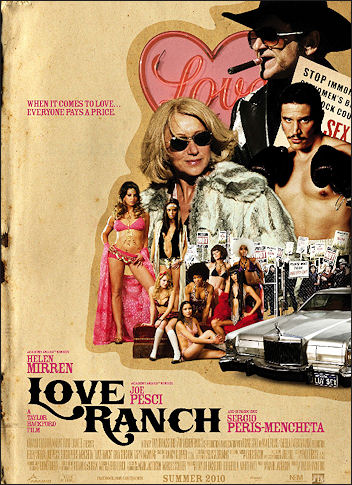 “Most of us are a little scared, I think, of husband-and-wife collaborations on films,” I noted last month, “as they tend to disappoint, hence the muted enthusiasm about this one. The screenplay, however, is by celebrated author and longtime New York magazine contributor Mark Jacobson, who based it on a story he wrote about the ranch, so maybe.

“The film has been tied up in legal wrangles due to the producers, Capitol Films David Bergstein and Ron Tutor, having failed to make payments on loans and being foreclosed upon in late ’08, blah, blah. But financial boondoggles never prevent a film from being shown at a festival or two, as critical acclaim at Toronto or Sundance can obviously add value to the core asset. If it’s worth showing, there’s always a way.”

I’m aware, of course, that E1, the sales agent, might not want someone like me to show up and potentially post something negative so I may be looking at a challenge.