In an 8.18 interview with Christiane Kubrick, the 78 year-old widow of Stanley Kubrick, Guardian contributor Jon Ronson reveals what seems to me like an exceptionally sad fact. Vivian Kubrick, 50, who played “Squirt” in 2001: A Space Odyssey and who shot that Making of ‘The Shining’ doc, succumbed to Scientology about a decade ago, and now her mother considers her “lost.” 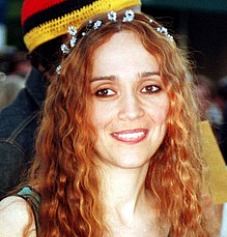 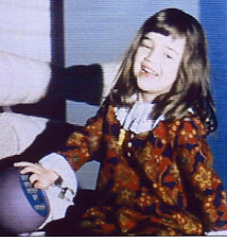 Vivian Kubrick about 10 years ago, and during her bush-baby scene in 2001: A Space Odyssey.

“She was hugely loved, and now I’ve lost her,” Christiane says. “You know that? I used to keep all this a secret as I was hoping it would go away. But now I’ve lost hope. So. She’s gone.”

“It all began, she says, while Stanley was editing Eyes Wide Shut, which starred Tom Cruise and Nicole Kidman. Stanley asked Vivian to compose the score, but at the last moment she said she wouldn’t. Instead, she disappeared into San Francisco and Los Angeles. ‘They had a huge fight,’ Crhistiane recalls. ‘He was very unhappy. He wrote her a 40-page letter trying to win her back. He begged her endlessly to come home from California. I’m glad he didn’t live to see what happened.’

“On the day of Stanley’s funeral, Christiane says, ‘Vivian arrived with a woman nobody recognized. She just sat in Vivian’s room. Never said hello to us. Just sat. We were all spooked. Who was this person? Turns out she was a Scientology something-or-other, don’t know what.’

Scientology “is [Vivian’s] new religion,” Christiane explains. “It had absolutely nothing to do with Tom Cruise by the way. Absolutely not.”

“I think she must have been very upset [by her father’s death],” Christiane says, “but, again, I wouldn’t know. I know nothing. That is the truth. I can’t reach her at all. I’ve had two conversations with her since Stanley died. The last one was eight years ago. She became a Scientologist and didn’t want to talk to us any more and didn’t see her dying sister Anya, didn’t come to her funeral. And these were children [who] had been joined at the hip.”

The following portion of Ronson’s interview stopped me short: “[Christiane] says that when Stanley was alive, he kept her and their daughters cosseted from stress, from life’s legal and financial arrangements, allowing them to float through Childwickbury without worries.”

Let me explain something. If anything is going to interfere with the ability of a younger person to cope with life as they begin to make their way on their own, it is having been “cosseted from stress” and shielded from “life’s legal and financial arrangements” as a child.

Parents believe that allowing a child “to float through” his or her early life “without worries” is a profound expression of love. It is in fact one of the worst things you can do to a son or daughter. I know three or four people who lived somewhat shielded lives as children, and now they could arguably be called hiders in one way or another. They aren’t unhealthy or uninteresting people, mind, but they seem to have sought to recreate that sense of being “sheltered from the storm” that they knew during childhood. The strongest people tend to be those who’ve experienced a little up and down and rough and tumble in their formative years. Like me.