It’s true — Stan Winston is gone. I don’t know what happened — the man was only 62, for God’s sake — but man…early! What a legend in his realm — the top godfather-creator of cool-ass Hollywood monsters, predators, dinosaurs and various other grotesqueries for the last 20-plus years. Pretty much the dean of the school since the creation of the first Terminator in ’84 up until to his stellar work on Ironman. 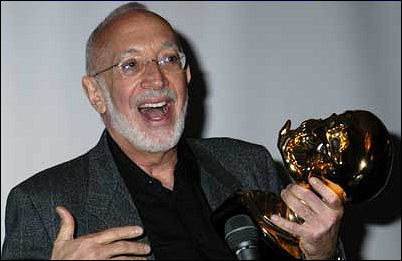 The idea of a brilliant, energetic, super-creative guy leaving the earth at the beginning of his third act (as poor Tim Russert just did a few days ago) is, of course, offensive and appalling. Here’s the official site for Stan Winston Studios, but it’s…I don’t know what to say except that death can be an extremely rude and untimely visitor.
For me, for everyone, Winston’s legacy rests upon his animatronic, makeup and model-design work in two franchises — the Terminator films (he’d been working on the latest — McG’s Terminator Salvation: The Future Begins) and the Jurassic Park films. You can point lots of other creations and go on and one about them (liek his work on Edward Scissorhands), but Winston’s work on these two famous franchises are the foundation of his rep.
Whenever I think of Winston I think of (a) the “sick tryke” — the wheezing, breathing Triceratops lying on its side — in the first Jurassic Park, (b) that horrific army of razor-tailed, bullet-headed monsters in James Cameron’s Aliens, and the T2 skeleton with the red eyes — the first life-form seen in Cameron’s T2: Judgment Day. 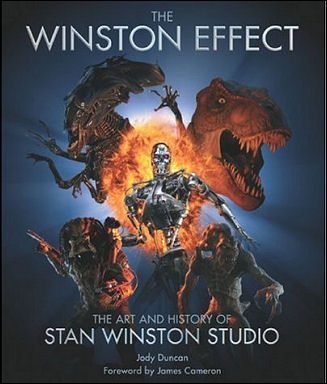 Winston won Oscars for his make-up and visual effects work on Aliens, T2: Judgment Day and Jurassic Park, and was nominated for his work on Predator, Edward Scissorhands, Heartbeeps, Batman Returns, The Lost World and Steven Spielberg‘s deeply loathed AI.
I never knew Winston; never even met him. I do know that I spent lots and lots of money on action figures based on Winston creations for my kids in the early to mid ’90s. I still have a couple of good-sizen alien figures based on his Aliens work. I’m particularly enamored of the big black queen. I also know that suddenly I feel like watching The Lost World again. That film got a bad rap when it opened, but I’d rather watch it ten times than sit through A.I. once. 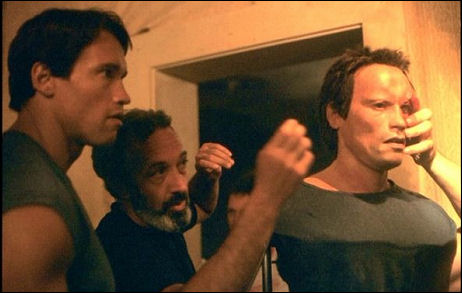