Stand Up For Mean Dreams

Okay, it also has a 64% Metacritic tally, but that’s because of Rooney and Lodge and two other pissheads — RogerEbert.com’s Nick Allen and Screen Int’l‘s Allan Hunter. Don’t let the views of four measly critics fuck things up. Mean Dreams is a completely decent reworking of a familiar American heartland tale, and if it includes an original riff or two (which Mean Dreams does) then I don’t see a problem. 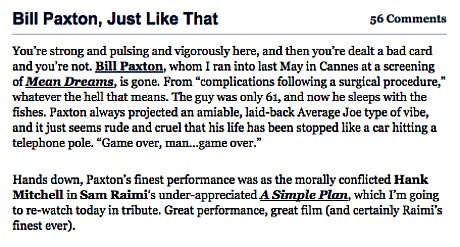 Some critics are mentioning that seeing Mean Dreams will be your chance to pay a final tribute to costar Bill Paxton, who passed less than three weeks ago. Here’s my obit.

Filed from Cannes on 5.15.16: “Mean Dreams isn’t blazingly original, but I found it a handsome, pared-down thing that doesn’t give in to the usual blam-blam when a gun is purchased and push comes to shove.

“It isn’t how familiar something seems as much as how spare and straight the chops feel. Take, assimilate, make anew. And the quality of the performances, which in this case struck me as near-perfect in the case of co-leads Josh Wiggins and Sophie Nelisse, and a bad-cop, pervy-dad turn by Bill Paxton that…okay, felt a little moustache-twirly at times and yet acceptable enough in the context of greed, alcohol and obsession.

“Plus Colm Feore‘s slightly less corrupt lawman plus Steve Cosens‘ handsome cinematography and a sometimes slammy percussive score by Son Lux…solid as far as it goes.”