Stein joins up with fundamentalists

“Disinvited to a Screening, a Critic Ends Up in a Faith-Based Crossfire,” a 3.10 N.Y. Times story by John Metcalfe, is about how Orlando Sentinel critic Roger Moore managed to attend a screening of a fundamentalist right-wing documentary called Expelled: No Intelligence Allowed, in which Ben Stein does a Michael Moore-ish job of selling the idea of “intelligent design,” and how he panned it and so on. 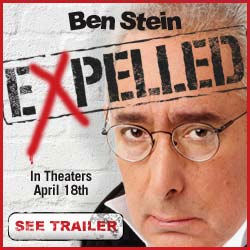 Intelligent design, which President George Bush allegedly believes in, is creationism in new clothes. Anyone who’s seen Inherit The Wind, the Stanley Kramer drama about the famous 1925 “monkey trial” in Dayton, Tennesee, knows that creationism is a belief that God in heaven created everything as part of an immaculate design. They also know that creationism’s most fervent supporters during the monkey trial days were backwater yahoos — the religious right of the Calvin Coolidge era.
Premise Media Corporation, a right-wing religious organization involved in various Christian enterprises (including super-churches), produced and is distributing Expelled.
The irony is that I happen to believe in intelligent design also, in a sense. There is obviously a unified flow and an absolute cosmic commonality in all living things and all aspects of the architecture. The difference is that I don’t attach a Bible-belt morality to this overwhelming fact. To me God is impartial, celestial, biological, mathematical, amoral, unemotional, miraculous and breathtaking. However you define the altogether, He/She/It has absolutely zero “interest” in whether you or your great-uncle or next door neighbor are adhering to the Ten Commandments or having an abortion or helping a homeless person or what-have-you. The molecular perfection and mind-blowingly infinite implications of God are way, way beyond ground-level morality.
What I don’t get is why a sophisticated brainy fellow like Ben Stein would make a movie for Bible-belt types. He surely doesn’t believe that the earth was created 6,000 years ago, or that cavemen and dinosaurs roamed the earth at the same time. (This issue was brought up by a born-again Christian character in The Sopranos a couple of seasons back, and Tony replied, “What, like the Flintstones?”) 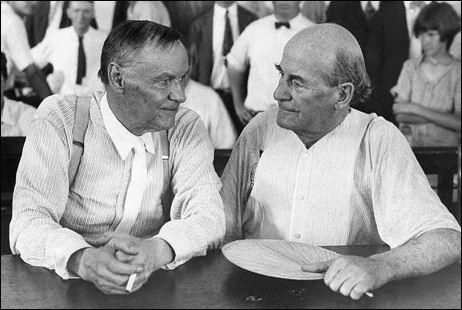 Stein is a very bright fellow, and not in my judgment the type to look heavenward for answers to everything, and certainly not one to embrace the primitive attitudes of those who call themselves “God-fearing.” When I interviewed Stein for a 1994 Los Angeles magazine piece about Hollywood Republicans, he said that “the agenda of Republicans out here is the same as everyone else — get in on the goodies.” Stein, in short, is basically a right-wing guy who’s in business. What was he paid to be the star of Expelled? What are they paying him to attend early screenings?
In that same article screenwriter Lionel Chetwynd said that “people on the right are considered by people of the left to be too insensitive, too Darwinian. They’re not touchy-feely enough to write touchy-feely movies. They have been ghetto-ized into the action field.” Darwinian?