This morning I happened to stumble upon a Spanish Bluray of Mister Roberts (Escala en Hawaii), and I was instantly reminded how much I despise this painfully sentimental and simple-minded 1955 film. None of it is funny. It just lies there like a dead fish. Okay, there’s one amusing moment, when James Cagney rants about how he loathes upper-crust college boys, and how he once felt humiliated by a couple of them while working as a bus boy…”Oh, bus boy? It seems my friend has thrown up all over the table…clean up the mess, bus boy…will ya?”

With very few exceptions military service comedies of the ’50s and ’60s have aged very, very badly, especially those influenced by Mister Roberts. That starchy vibe of official conservatism and sexual repression, the tone of adolescent idiocy, the constant emphasis on stupid frat-boy attitudes and anti-authoritarian behavior, and most of them painful as fuck to sit through. 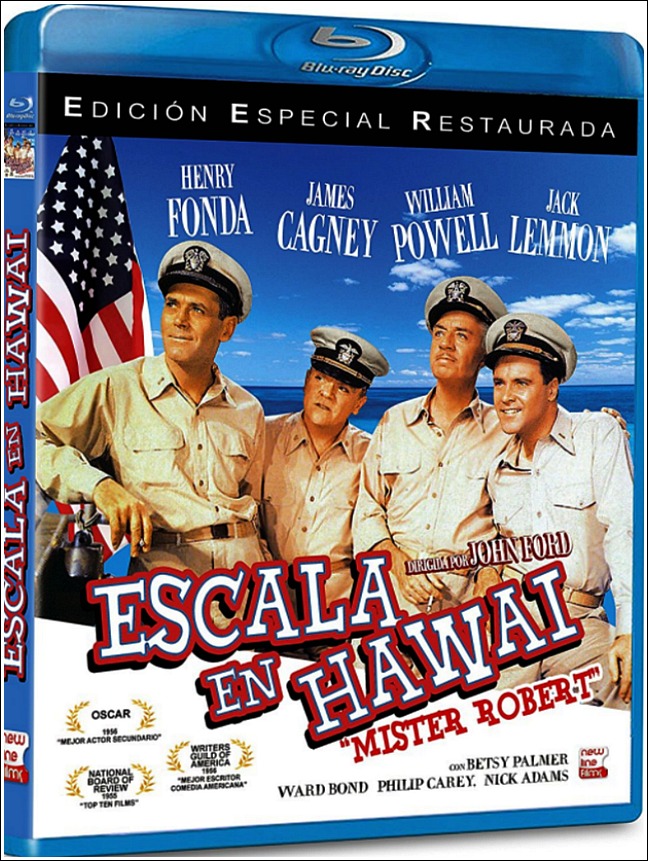 Operation Petticoat, Kiss Them For Me, Onionhead, Rally Round The Flag Boys, Ensign Pulver, A Private’s Affair, The Wackiest Ship In The Army, Soldier in the Rain, The Honeymoon Machine, The Last Time I Saw Archie, etc. Every last one a stinker.

Even P.T. 109, that mediocre Cliff Robertson war drama that was produced in tribute to President Kennedy, adopted the tone of these awful service comedies because it seemed like a commercial way to go. Doing so made it seem even worse.

Decent military comedies: Operation Mad Ball, What Did you Do In the War, Daddy? MASH, The Last Detail, No Time for Sergeants, King of Hearts. Others?