A 20something guy sat next to me during yesterday’s train trip from Gare de Lyon to Cannes. About 90 minutes after departure he got up and went to the food car, an all-metal enclosure on the upper deck, mostly serving McDonald’s-like eats and drinks. But instead of wolfing his food up there, the guy brought it back to our first-class haven.

Right away the smell of microwaved cheese, pickles and burger meat filled the air. And then he opened the wrappers and it was even worse.

I knew that giving this animal two or three stink-eye glances wouldn’t matter, but I did it anyway.

It would be one thing if he returned with an apple or a cappuccino or a cold sandwich, but subjecting travellers to toxic fast food fumes is only a step away from cutting a series of elephant farts.

On top of which the guy darted outdoors every time we stopped at a big city (Lyon, Toulon, Marseilles) to smoke a cigarette, and when he returned the putrid aroma of nicotine and cheap tobacco was nearly as bad as the cheeseburger.

Did it occur to this guy that that his fratboy manners were a problem? Naaah. One of the key traits of assholes worldwide is not being even faintly aware that they might be irritating others. The thought never even occurs. 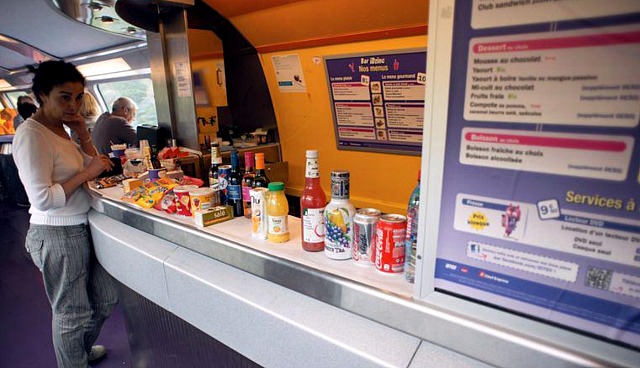