It’s fair to say that Emilio Estevez‘s directing abilities were amply exhibited in Rated X (’00), which I felt was pretty awful after seeing it at Sundance six and half years ago. This is one reason I’m not all that enthused about seeing Bobby (Weinstein Co., 11.17) at the Toronto Film Festival. Estevez’s film (he directed and co-wrote) is about how Robert Kennedy‘s shooting on 6.4.68 affected various people (i.e., not just campaign workers) who were inside L.A.’s Amassador Hotel when it happened. 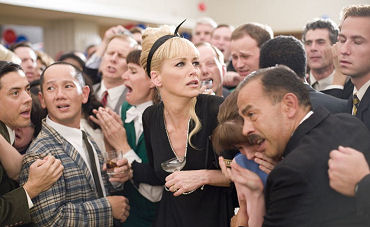 Between the Estevez directing resume (which also includes Men at Work and Wisdom) and that hugely entertaining, frequently funny story written by Bobby screenplay polisher John Ridley in Esquire last year, I’m not seeing indications of great artistic assurance. I don’t think anyone is.
Take the Bobby one-sheet,, for example. It uses three lines that Sen. Ted Kennedy spoke in his eulogy speech for his slain brother during the funeral service at St. Patrick’s Cathedral: “He saw wrong and tried to right it. He saw suffering and tried to heal it. He saw war and tried to stop it.” Fine…but this obviously makes the film sound like a drama or a doc about Kennedy himself, as opposed to a story about how others were affected by his death or influenced by his example. It’s a dishonest ploy that leads you on.
The fact that Bobby is going to be screened as a gala (i.e., Roy Thomson Hall) showing at the Toronto Film Festival as a “work in progress” (per a press release issued today) obviously infers that somebody at the Weinstein Co. feels it’s not in a state of maximum readiness.
That said, I’m hearing that Sharon Stone gives the pop-through performance among the large ensemble cast.
Estevez has given himself a role in the film along with Anthony Hopkins, Helen Hunt, Stone, Harry Belafonte, Nick Cannon, Laurence Fishburne, Heather Graham, Joshua Jackson, Ashton Kutcher, Lindsay Lohan, William H. Macy, Demi Moore, Freddy Rodriguez, Martin Sheen, Christian Slater and Elijah Wood.
Let’s at least give the Weinstein Co. credit for changing the Bobby release date from Wednesday, 11.22.06 — the 43rd anniversary of JFK’s assassination — to Friday, 11.17.06. The former date has absolutely nothing to do with Bobby, and trying to use JFK’s murder as a springboard was a rancid thought, to put it mildly.