It would appear that Tim Burton‘s Alice in Wonderland is rooted in the mid 19th Century (i.e., 1865) , when Lewis Carroll published the original book. (Which was followed by an 1871 sequel, “Through The Looking Glass.”) Hence the all-Anglo cast and lack of minorities, not to mention the possible absence of any political points or metaphors as they might apply to the present. But I don’t have the script. 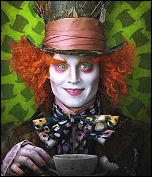 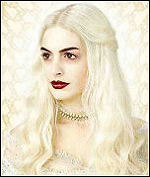 For any half-literate person who’s ever turned on, Alice in Wonderland isn’t just a surrealist political satire but the ultimate hallucinogenic fantasy. For boomers and older GenXers it’s always been stoner central, Owsley/Sandoz ground zero, “Lucy in the Sky with Diamonds” in 19th Century garb, a Grace Slick anthem, etc. All of which is anathema, of course, to Disney and their antiseptic family demo. “Mommy, did grandma or grandpa ever eat mushrooms?”

It is little remembered that Cary Grant played the Mock Turtle in Norman Z. McLeod‘s 1933 version, or that Cary Cooper played the White Knight.