Presumably someone out there has a recent draft of Mikko Alanne‘s script of Pinkville, which director Oliver Stone will make into a film sometime early next year for United Artists. It seems like an astute move for Stone to not only revisit his own Vietnam combat experience as well as the turf of Platoon, his greatest screen triumph, but to also reflect on the Iraq War experience by looking back at another time when U.S. troops were frequently seen as the bad guys when it came to dealings with civilians. 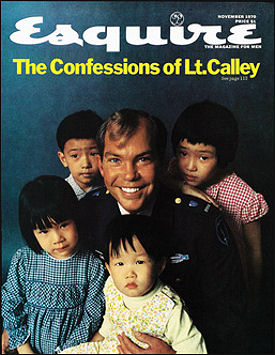 I realize that Pinkville will not be focusing on William Calley, the Army Lieutenant who became a poster boy for G.I. atrocity-committers during the Vietnam War after news of the My Lai massacre — the slaughter by U.S. troops of 500 villagers, many of them women, children and elderly in March of 1968 — broke through. But I wonder to what degree, if any, it will include him in the scenario.

Calley, 64, is apparently retired and now lives in Atlanta, after a lifetime of working at a jewlery store in Columbus, Georgia. He will of course have to go through the whole magilla all over again once the film comes out.

Michael Fleming‘s Variety story says the focus will mainly be on a good-guy whistle-blower — General William Peers (Bruce Willis), who spearheaded the investigation of the 1968 My Lai massacre. Peers took heat from trying to get at the truth when most of the military establishment wanted it to just go away fast, especially after President Richard Nixon, looking to kowtow to the blue-collar, construction-worker, pro-Vietnam War voters, announced that he would personally review the Calley court-martial situation before any sentence was passed.

There’s a scene in Platoon, of course, in which some of the angrier and more belligerent troops (two fo them played by Tom Berenger and Kevin Dillon), furious over the death of comrades, terrorize and come close to killing several villagers before everything is stopped by Willem Dafoe‘s Sgt. Elias. 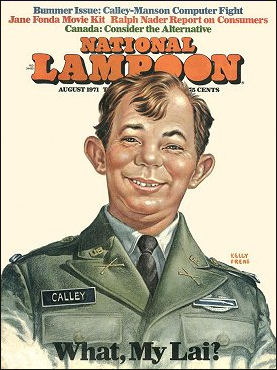 Channing Tatum “will play Hugh Thompson, a helicopter pilot who, upon realizing what was happening below, put a stop to the killing by placing his craft between gunmen and the few villagers who were left, and telling his two shipmates to fire on the soldiers if they shot any more people,” Fleming reports. “They airlifted the survivors and reported the carnage to superiors.”

Presumably Seymour Hersh, the reporter who broke the My Lai story in late 1969, will be a character also.

At his court-martial, Calley “testified that he was ordered by Captain Ernest Medina to kill everyone in the village of My Lai. Still, there was only enough photographic and recorded evidence to convict Calley, alone, of murder. He was sentenced to life in prison, but was released in 1974, following many appeals. After being issued a dishonorable discharge, Calley entered the insurance business.”

The little kid to the left of Calley on the Esquire cover, the one with the expression that sort of says “the idea behind this photograph is kinda sick”? I wonder where he is today. I’d like to know if he deliberately conveyed that expression for the Esquire photographer, or whether it just happened.