[Note to A24: I haven’t posted the following because I’m not an admirer of Willem Dafoe‘s performance in The Florida Project, or because I disagree with the likelihood of his winning a Best Supporting Actor Oscar. I’m just trying to explain why I think his performance is by far the most popular of all the 2017 contenders in his category.]

Make no mistake — Willem Dafoe is going to win the Best Supporting Actor Oscar for his performance as a harried building manager in The Florida Project. Everyone “knows” or assumes this because he’s won this prize from eight critics groups (NYFCC, LAFCA, BSFC, National Board of Review, San Francisco, NYFCO, Detroit, Atlanta). Aaaah, but why have the elite know-it-alls chosen Dafoe? I’ll tell ya why, and it ain’t deep. Because he’s this year’s Mahershala Ali. 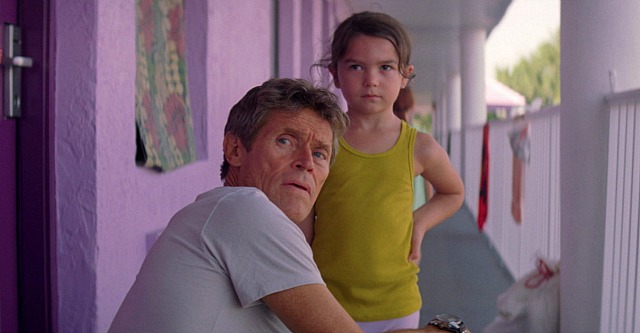 Supporting performances generally win awards not because of sustained inventiveness but because the character does one thing that the audience really likes, and because people tend to remember that one thing when they vote. Sometimes the performance will make that one thing feel extra-powerful or extra-resonant (i.e., Beatrice Straight‘s big moment in Network), but Academy and guild members primarily vote for what a character does or says at a crucial juncture in a film.

Dafoe is way ahead this year because his character, Bobby Hicks, does one righteous and compassionate thing that everyone loves — he saves a group of little kids from being preyed upon by a creepy child molestor. That’s it, the whole thing.

Dafoe plays a middling low-life character with conviction and compassion, but when you boil it all down what else did Dafoe actually do in that film? What major crescendo or galvanizing moment did he otherwise deliver or take part in? Nothing. He reminded deadbeat tenants to pay their rent, tolerated the kids’ raucous behavior, painted the apartment walls, etc.

Last year Mahershala Ali‘s performance in Moonlight won a Best Supporting Actor Oscar because his character, Juan, did one righteous and compassionate thing — he taught “Little” to float and maybe swim around in the Atlantic Ocean. That was it, the whole thing.

Like Dafoe, Ali won a tonload of Best Supporting Actor awards from pretty much every industry-related group on the planet during the 2016 award season, and they all gave him their awards because of the swimming scene. (I said this over and over last year — you’re giving this guy an Oscar because his character taught a kid to swim?)

Would Mahershala have won if that scene hadn’t been part of Moonlight? Not a chance.

Would Dafoe have even a prayer without scaring away that child molestor? Nope, but the scene is there, everyone loves it and Dafoe is locked.

I’ve been saying all along that the Best Supporting Actor Oscar should go to either Call Me By Your Name‘s Michael Stuhlbarg or to Sam Rockwell for his performance in Three Billboards outside Ebbing, Missouri.

What is the one righteous and compassionate thing that Stuhlbarg and Rockwell’s characters do?

At the climax of Call Me By Your Name Stuhlbarg accepts and comforts his emotionally distraught son (Timothy Chalamet) in the wake of a passionate affair with another man (Armie Hammer), and tells him to cherish the pain and even learn from it. And Rockwell decides to stop being a reckless asshole by reaching out to a former nemesis, Frances McDormand‘s Mildred Hayes, by helping her find closure over the brutal death of her daughter.

Stuhlbarg’s advice to his son: “Look, you had a beautiful friendship. Maybe more than a friendship. And I envy you. In my place, most parents would hope the whole thing goes away, or pray that their sons land on their feet soon enough. But I am not such a parent. In your place, if there is pain, nurse it, and if there is a flame, don’t snuff it out, don’t be brutal with it. Withdrawal can be a terrible thing when it keeps us awake at night, and watching others forget us sooner than we’d want to be forgotten is no better.

“We rip out so much of ourselves to be cured of things faster than we should that we go bankrupt by the age of 30 and have less to offer each time we start with someone new. But to feel nothing so as not to feel anything…what a waste!”