My only Sundance screening today (so far) has been Gonzalo Arijon‘s Stranded, the doc about the Uruguyan plane-crash survivors who were forced to resort to cannibalism after landing in the snow-covered Andes mountains in October 1972 and being stuck there for 72 days. 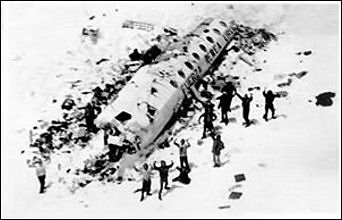 Stranded is partly a first-hand, looking-back, talking-heads doc, partly a revisiting of the crash scene and partly a grainy, dialogue-free re-enactment. It’s touching from the start, and holds you all through its 122-minute length. (The Sundance program notes are incorrect in saying it’s 113 minutes long.)
This famous saga, dramatized in Frank Marshall‘s Alive (’93) as well as Piers Paul Read‘s “Alive: Sixteen Men, Seventy-two Days, and Insurmountable Odds–the Classic Adventure of Survival in the Andes,” is about how 16 young men (most members of a rugby team) managed to survive over a 72-day ordeal, partly by eating the flesh of those who’d been killed.
I was told earlier this month it’s as good as — certainly in the realm of — Kevin McDonald‘s Touching The Void, and I’m in full agreement. Right away you sense this is no run-of-the-mill revisiting. The emotionally delicate tone and complex layers and shadings imply from the get-go that Arijon has the hand of a poet-maestro.
The doc’s unique aspect is not only talking to many of these survivors (kids at the time, now in their 50s and 60s), but also joining them on a trip back to the site of the crash for some reliving and reflecting.
Everyone has a morbid curiosity about this story, and while I admire Arijon’s sensitivity a part of me wishes he had been a bit more blunt about the particulars of being forced to eat dead friends, relatives and loved ones in order to survive. What does human flesh taste like? Are certain sections of the body more appetizing than others? (I’ve always heard that the ribs are slightly more choice.)
Starnded will show four times at Sundance, and is also booked to show at Roger Durling’s Santa Barbara Film Festival at the end of the month. The full title is actually Stranded: I’ve come from a plane that crashed on the mountains.