A barbed, X-Acto knife review of Justin Theroux‘s Dedication (Weinstein Co., expanding 9.14) came yesterday from N.Y. Times reviewer Jeanette Catsoulis, with a brilliant opening graph that touches on the relatively new movie-plot phenomenon of genetically impaired low-tide males winding up for no earthly reason with hotties who would never give them a second glance in real life. 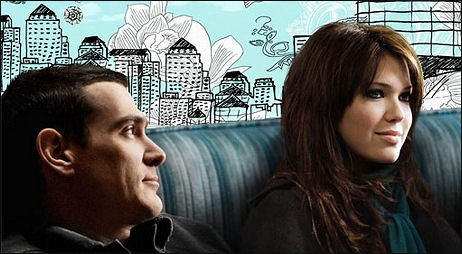 “That weird exhalation you hear at the multiplex these days is the sound of female characters settling for less than they deserve,” Catasoulis writes. “Following on the wildly successful anti-feminist heels of Knocked Up, Hollywood is falling over itself to introduce beautiful, smart young women to useless, possibly brain-damaged young men. Regular bathers need not apply.”

Seth Rogen bedding and developing a fruitful relationship with Katherine Heigl in Knocked Up. Jonah Hill ending up in a possibly promising relationship with Emma Stone‘s “Jules” at the end of Superbad. Dane Cook, a very convincing animal-sociopath in Mr. Brooks and a guy who’s exuded a kind of frazzled dork quality all along, romantically pairing off with “penguinologist” Jessica Alba in the forthcoming Good Luck Chuck. Will Ferrell ending up with Maggie Gyllenhaal in Stranger Than Fiction. Any others?

These quizzical pairings are happening because the director-producer-writers behind these films obviously want to see inappropriate guys hooking up with saucy attractive women. One reason is that it’s pleasing to slovenly dorky guys to think that hotties will fall for them under the right circumstances Another is that Judd Apatow, who doesn’t see himself as a Cary Grant type, has a very pretty wife.

I also think these pairings reflect current sociology to some degree. I can’t tell you the number of times I’ve seen extremely foxy younger women walking down supermarket aisles with guys who, by my standards, are far, far below them in terms of attractiveness. There’s nothing wrong with a guy being 157 miles away from being GQ cover material, but when he’s paired off with a girl who’s an 8.5 or a 9, something’s weird. You know the kind of guy I mean…thirtysomethings shuffling around in cutoffs and sandals (with funny-looking unpedicured toes) and squiggly man-beards and bodies that haven’t seen a gym in a good ten years.