Born in 1970, Matt Damon was raised in Cambridge, which can be a rough and brutish culture as far as old-school Boston machismo is concerned. He eventually moved up and out of Cambridge, of course, but you can never entirely rid yourself of the old ‘hood. Pieces and shards of your upbringing have a way of sticking to your skin, and there’s no washing them off completely.

Hence the difficulty Damon has gotten himself into after telling the UK Sunday Times‘ Jonathan Dean that “he only stopped using the “f-slur for a homosexual” months ago.

Damon clarification: “I have never called anyone ‘f****t’ in my personal life…I do not use slurs of any kind. I have learned that eradicating prejudice requires active movement toward justice rather than finding passive comfort in imagining myself ‘one of the good guys.’ And given that open hostility against the LGBTQ+ community is still not uncommon, I understand why my statement led many to assume the worst. To be as clear as I can be, I stand with the LGBTQ+ community.”

Tens of millions of young straight guys who rocked and bopped around in the early to mid ’70s…they were all familiar with certain derogatory terms for gay guys. As urban culture evolved they learned, of course, that failing to jettison those terms…hell, even thinking with such terms would hurt them socially and professionally, and so most of them adapted. But with others the old attitudes hide in the shadows.

Warren Beatty is one of the most socially sensitive and political-minded fellows I’ve ever spoken to — he’s very, very careful with what he says and always uses the most oblique terminology he can think of. And yet even Beatty, in the person of George Roundy, used the “f” epithet in this scene with Carrie Fisher in Shampoo (’75), which was released when Damon was five years old. If Beatty and the Shampoo guys (Hal Ashby, Robert Towne) were okay with using the term, you can be damn sure that the world did back then and that it wasn’t a big deal to anyone. [The passage I’m referring to starts at the seven-second mark, and the epithet is repeated by Fisher at the 37-second mark and again at 1:02.] 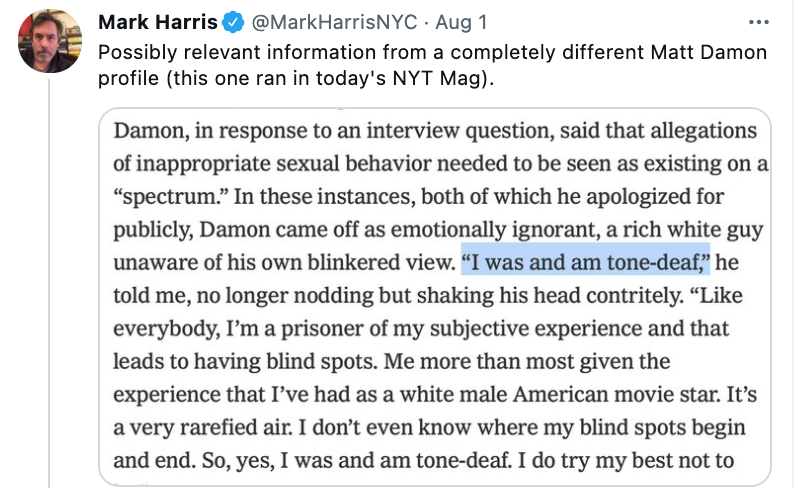