A showing of Colin Trevorrow‘s The Book of Henry (6.16, Focus Features) opened the 2017 L.A. Film Festival last night. Inquiring minds were asking a two-fold why — why launch a still-struggling film festival with a movie that has been dogged by dreadful buzz since last spring and which currently has a 28% Rotten Tomatoes rating, and why a film that’s opening nationwide two days hence?

Aren’t film festivals supposed to show films, however good or bad, at least a week or two before they open? Don’t they need to offer festivalgoers a little breathing room between their own special viewing and subsequent ones by mongrel megaplex hordes?

In a 6.14 interview with Indiewire‘s Anne Thompson, LAFF director Jennifer Cochis says she used her old friendship with director Colin Trevorrow to book Henry as her opening-night flick. ‘We were festival buddies at Sundance,’ Cochis says. ‘He’s an ordinary guy that extraordinary things happened to.'”

She’s referring to Steven Spielberg having chosen Trevorrow to direct Jurassic World because they’d bro-bonded. Indeed, the enormously successful Jurassic World was a huge career boost for Trevorrow just as surely as The Book of Henry, a huge critical calamity, is a spear in his side.

You could almost describe the current situation by paraphrasing a sentence in Vincent Canby‘s review of Heaven’s Gate, to wit: “The Book of Henry fails so completely that you might suspect Mr. Trevorrow sold his soul to the Devil to obtain the success of Jurassic World, and the Devil has just come around to collect.” 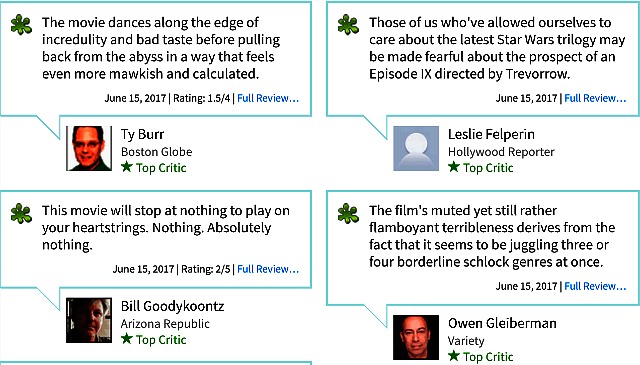