Matteo Garrone‘s Gomorrah, an Italian-mafia crime film, was perhaps the best 2008 Cannes Film Festival selection that I didn’t see. (Of course, not having seen it I can’t say this absolutely, but everyone spoke of it very highly.) IFC will distribute in this country. It’ll probably play Toronto and then open in late September or October. Here’s a 7.9 N.Y. Times story by Elizabetta Povoledo that discusses Gomorrah and another big Italian title, Il Divo. 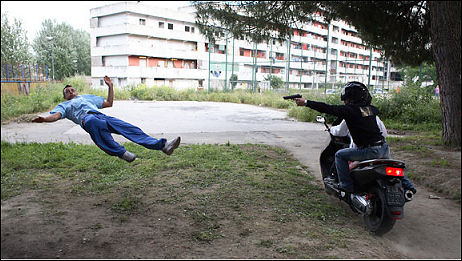 But what’s this odd-looking photo that ran with the Times piece? It looks like the shooter on the scooter is using an anti-gravitational levitation weapon that stuns the victim and causes him to float two or three feet above the ground. Of all the photos and frame captures, someone selected a still that almost suggests some kind of dark comedy or sci-fi piece? I’m not saying it fits either bill, but it certainly flirts.