Bill Maher and Larry Charles‘ Religulous, the Lionsgate doc that will play at the Toronto Film Festival roughly two weeks hence but won’t open in theatres until 10.3, is now playing twice daily at Laemmle’s Claremont 5, about 20 minutes east of downtown Los Angeles. Here’s the link to the Yahoo page showing the current Claremont 5 listings, and here‘s the recording. 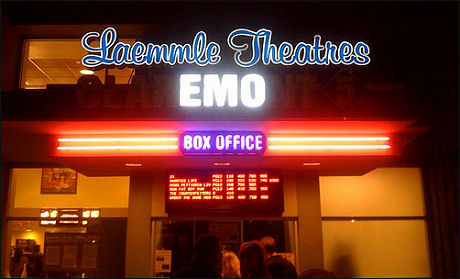 No reference to the crybaby musical genre — it’s just that the letters “clar” and “nt” were dark when the shot was taken.

The reason for the early booking is the Academy’s Rule 12, which states that to be eligible for a Best Documentary Feature “a documentary feature must complete both a seven-day commercial run in a theater in Los Angeles County, and a seven-day commercial run in a theater in the borough of Manhattan between September 1, 2007 and August 31, 2008.”
That means Religulous is probably playing in some out-of-the-way theatre in the Manhattan area also. No critics will be reviewing off the Claremont booking. Even though, it must be noted, N.Y. Times critic Manohla Dargis reviewed Roman Polanski: Wanted and Desired off of a qualifying booking in a theatre in Yonkers last March.