Suddenly My “Beer Run” Blood Is Up

Peter Farrelly‘s The Greatest Beer Run Ever (Apple+, 9.30) will have its big debut at the Toronto Film Festival, probably sometime between 9.8 and 9.14, I’m guessing. The trailer is excellent and so is the poster, and I’m suddenly I’m thinking “hey, wait…this might be something.”

We all know that wokester critics are going to be gunning for Farrelly in order to punish him for Green Book having won the 2018 Best Picture Oscar. Somewhere between 96% and 97% of the moviegoing world loved that film (me too) but the wokesters did everything they could to kill it, and so they’re determined to pay Farrelly back. (They’ll deny this, of course.)

We also understand that a film about a New York working-class paleface with a meathead accent travelling thousands of miles to bring beer to his Vietnam War-serving bruhs in ’67 and ’68 is going to be attacked six ways from Sunday…too white, too apolitical and not guilty enough for starters. Or so it would seem, I should say, based on the trailer and to some extent John “Chick” Donohue and Joanna Molloy’s 2020 book.

But you can also tell Farrelly’s film is a grade-A thing — first-rate writing, acting, cinematography, atmosphere, the works — and that slivers of moral ambiguity have been slipped between the story beats. 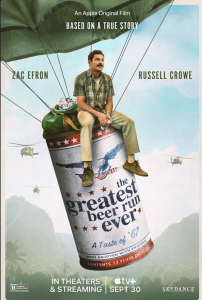 Posted on 4.13.22: I’ve read Donohue and Molloy’s book, and it’s quite the episodic journey — an apolitical adventure about the Vietnam War and being in harm’s way with Donohue, the lead protagonist (Zac Efron), somehow making his way through all the dangers and red tape and whatnot.

The book reads like a kind of working-class love story — a saga about 20something guys who were serving (or had served) in the Vietnam War during the mid to late ’60s…a time when many in the antiwar left were professing hate or contempt for soldiers for bringing all kinds of horror to the lives of Vietnamese citizens (i.e., My Lai).

If Farrelly’s film follows the tone and attitude of the book, The Greatest Beer Run Ever will almost certainly not bear much resemblance to Platoon, Full Metal Jacket, Apocalypse Now, Coming Home, Da 5 Bloods or any other high-profile Vietnam flick that comes to mind.

The book certainly isn’t channelling any kind of guilt-trip narrative. It stays with Donohue’s perspective start to finish, and doesn’t really deal with the war in any kind of Oliver Stone sense. It’s about the perspective of soldiers who were just trying to survive, and who probably felt little if any allegiance for U.S military objectives at the time.

Set in 1967 and early ’68, the book is Donohue’s first-hand account (he was 26 at the time) of having decided to use his ex-Marine and merchant seaman credentials to get over to Vietnam and somehow track down his buddies and tell them they’re loved by the gang back home and bring them a case of two of beer as tokens of same.

Donohue’s message in a nutshell: “Don’t let the antiwar left get you down, bruhs. We know you’re living through hell but we want you to know that we care about you, and here’s a brewski to prove it.”

Donohue (now just past 80) was too old to feel the antiwar thing. People born in 1941 were closer to the 1930s Baby Bust generation than to boomers, and Donohue, stamped with the values of the blue-collar neighborhood he grew up in, hadn’t been impacted by campus anti-war sentiments, or at least was unpersuaded.

He had a kind of old-schoolish, semi-traditional attitude about military service.

Besides Efron-as-Donohue, the film costars Russell Crowe and Bill Murray. The Beer Run screenplay is by Farrelly, Brian Hayes Currie and Pete Jones.