Sarah Gavron‘s Suffragette (Focus Features, 10.23) is the shit — a near-certain Best Picture contender and a cast-iron guarantee that Carey Mulligan will be Best Actress-nominated for her subdued but deeply emotional, fully riveting performance as Maud Watts, a married factory worker and mother of a young son who becomes drawn into the women’s suffrage movement in early 1900s London, just as the militant phase (led by the Women’s Social and Political Union, or WSPU) begins to kick in.

This is one top-tier, richly textured, throughly propulsive saga, and a good four or five times better than I expected it to be.

The Suffragette trailers were promising enough but the people at Focus Features had done a brilliant job of tamping down any expectations on a word-of-mouth basis. I’d come to suspect, based on a lack of any palpable advance excitement, that it might turn out to be a decent, good-enough film that could possibly provide a springboard for Mulligan…maybe. Well, it’s much more than that, such that I felt compelled explain to Gavron at the after-party that I was fairly gobsmacked.

Mulligan, looking appropriately hangdog for the most part, handles every line and scene like a master violinist. She’s always been my idea of a great beauty, but when she chooses to go there she has one of the saddest faces in movies right now. The strain, stress and suppressed rage of Maud’s life are legible in every look, line and gesture. Mulligan is fairly young (she just turned 30 last May) but she’s a natural old-soul type who conveys not just what Maud (a fictitious everywoman) is dealing with but the trials of 100,000 women before her, and without anything that looks like overt “acting.” All actors “sell it,” of course, but the gifted ones make the wheel-turns and gear-shifts seem all but invisible.

I was saying last night that her Suffragette perf is on the same footing with Mulligan’s career-making turn in An Education, but now, at 8:15 in the morning after less than six hours of shut-eye (and with my heart breaking over the realization that I’ve blown my shot at catching the 9 am screening of Spotlight), I’m thinking Maud is her signature role.

The none-too-hips and feel-good seekers (i.e., the crowd that loved The King’s Speech and went nuts last year for The Imitation Game) are going to be muted in their enthusiasm for this impossible-to-deny film (the stirring-but-somewhat-downish tone and occasional acts of political violence go against the comfort-blanket aesthetic), but serious film lovers are going to get it.

Suffragette feels like a period version of a kind of kitchen-sink film from England’s “free cinema” days of the early ’60s. It could have been directed by Karel Reisz (Saturday Night and Sunday Morning, Isadora) or Tony Richardson (The Loneliness of the Long Distance Runner, Tom Jones).

Suffragette will be enthusiastically received by women everywhere, but it hasn’t been made “for” them. Well, I suppose it has but it’s mainly just good — a well-crafted, pro-level thing by a director deploying skills that are on the level of Steven Soderbergh‘s or Ridley Scott‘s in his prime, a director who knows how to keep things moving and realistic and affecting, and who has the smarts to use a blue-chip editor (Barney Pilling, who was nominated for an Editing Oscar for his work on The Grand Budapest Hotel) and composer (Alexandre Desplat) and generally coordinate all the elements to their fullest effect.

In her Suffragette review Sasha Stone has written that “that one big crescendo is absent here” — not true. The big climax happens not directly to Maud but to one of her sisters, Emily Davison (Natalie Press), who killed herself by stepping in front of King George V’s horse at the Epsom Derby in June 1913. The shocking sacrifice, caught by news cameras, drew the world’s attention and kicked the suffrage movement up to another level. The film ends with Davison’s funeral, organized by the WSPU and resulting in something like the funeral of Lady Diana with thousands lining the streets of London.

I wrote a few days ago that I was hoping there will be more to Suffragette will be more than just a Selma-like portrait of a movement, or a dramatization of what a struggle it was for English women to fight against complacency and dismissive attitudes. “I’m just hoping there’s more to it than just ‘these women really paid the price,'” I wrote. One, this is a much, much better film than Selma ever dreamed of being. And two, it’s Maud’s story, but in such a way that the entire movement is felt and understood.

Women weren’t granted the vote because they smiled at lawmakers and said “please.” It happened because they pushed for it, and then pushed and pushed and pushed until it hurt. Power always has to be fought for, and this often means that the foot soldiers of any political movement will have to suffer cuts and bruises and deprivations.

But Mulligan is the big takeaway here. Gavron told me last night that she worked long and hard on her lower-class accent, which I love the sound of. There’s something almost musical about it. Not to mention that rock-steady gaze of Mulligan’s…those shrewd, evaluating eyes, that patiently simmering undervibe, the weariness. Mulligan is due to give birth “in about five days,” Gavron told me, so I don’t know how much campaigning she’ll be doing but she’s given a serious major-league performance and the realm will recognize this, trust me. 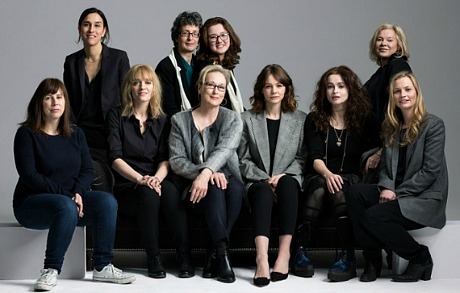 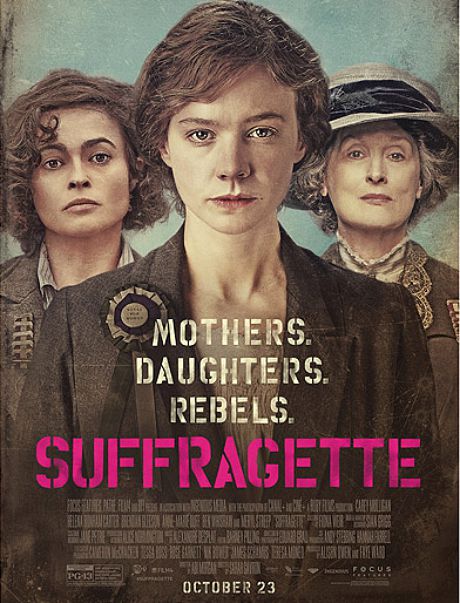 September 5, 2015by Jeffrey Wells18 Comments
« Previous post
My Heart Wept This Morning
Next post »
They All Loved Malala Except…Well, A Few Soreheads