L.A. Times-er Monica Corcoran has written one of the dozens of pre-Sundance, gearing-up-for-Park-City articles that are flooding the web right now, although hers has an unusual focus — the necessity of sharing accommodations. 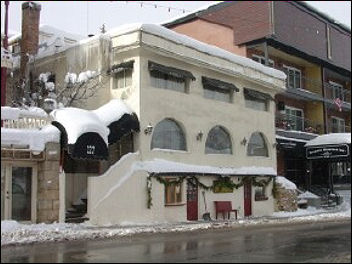 “Come Thursday, about 45,000 parka-wearing people will flock to this tiny, former mining town nestled in the Wasatch mountains. But according to the visitors bureau, there are only 23,000 pillows for all those well-coiffed heads. And these lopsided lodging logistics cause more confusion and headaches than the altitude sickness.”
For journalists, Sundance is pretty much synonymous with tight accomodations and shared bathrooms. O give me a bunk and a shower and a table and a chair and some good wifi, and it’s all cool. Not only do serious festivalgoers make do without outdoor hot tubs or crackling fireplaces or nouveau riche Deer Valley chateaus with 22-foot-high ceilings or those bullshit Utah buckaroo king-size bed frames. It’s kind of against the mindset (the religion, if you will) to stay in a lavish place. Pricey McMansion digs are for the dilletantes and lookie-lous and — the absolute dregs of Sundance Film Festival visitors — skiiers.
I’m a loyal fan of Carol Rixey‘s Star Hotel, easily the warmest and homiest place in town. And it has great wifi, and an excellent living room with soft easy chairs and fat sofas, and a dining room with nice long table to have a nice warm breakfast in. (Comes with the room.) 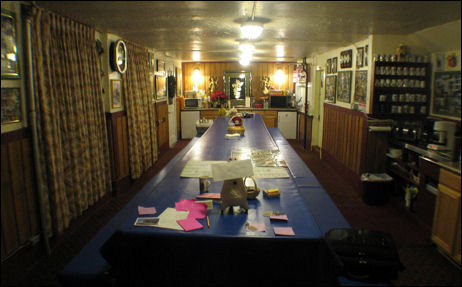 “Usually, the first co-workers to arrive hit the local Albertsons supermarket to stock up the fridge and pantry in the company condo,” Corcoran writes.
“Last year, we found Warner Independent’s grocery list in the produce section when we were doing our shopping,” says Michael Lawson, senior vice president of independent film publicity firm, mPRm. “It was so Sundance to read ‘get health bars for me’ and ‘I want root beer.’ ”
“Lawson says his team of seven has a general rule to ‘be respectful’ in the three-bedroom mountain house with the ‘stereo from 1972’ that they rent out every year. There’s also a sleeping annex upstairs that he likens to ‘the orphanage in Cider House Rules with a row of beds along the wall.”
I can tell you something — it’s the volunteers and the assistants sleeping in those Cider House beds who get all the nookie. In the mid ’90s I asked an assortment of festival veterans if they’d ever gotten lucky during Sundance, and all but one said “nope.” The exception was Usual Suspects and Valkyrie screenwriter Chris McQuarrie, who said yes, good things have personally happened to him in Park City but “only with an import.”