The Wrap‘s Sharon Waxman has written about the “bad blood” at Universal following the Green Zone debacle which may, she hears, result in a loss for the studio of $40 to $50 million. And it’s not just the fact that $130 million was spent on an Iraq movie. The marketing, she believes, was also to blame — i.e., “[it] sank like a stone and confused the hell out of me, for one.” 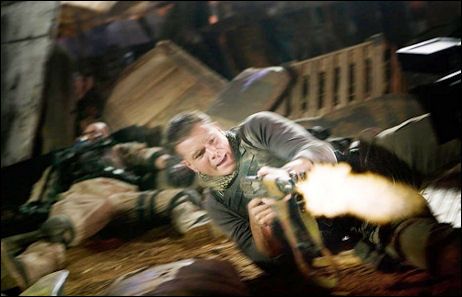 I wasn’t confused by the marketing. When Universal bumped Green Zone out of award season and into March 2010, the unmistakable message was that (a) they had a problem on their hands, and (b) they’d decided it would lose less if they could avoid Oscar-season ad pressures. That decision, in effect, was the marketing as far as I was concerned.

The trailer and one-sheet said the following: “Okay, here’s Matt Damon looking pensive and sweaty and Bourney…whatever. On one level it’s another shakey-cam type deal, but the monochrome poster image tells you it’s not a slam-banger — that it’s on the somber or conflicted side. It’s all in Matt’s facial expression. He’s going ‘I’m hot, I’m anxious and I’m running around, and I have a lot more running around to do before the film is over.’ So you know…it’s your call but we can’t even rouse ourselves into any state of excitement about this thing.”

I need some help with the math, though. Green Zone cost $130 million to make and you have to figure what…maybe $25 or $30 million to market? (I haven’t made any calls but I know Universal tried to keep costs down in this respect.) So you’re looking at a total outlay of $160 million, and the film has so far brought in less than $20 million theatrically in the US. Maybe the video will do decently and bring in…I don’t know what it will bring in. Nor do I have an intelligent estimate of future worldwide theatrical to pass along. But a projected loss of $40 to $50 million seems modest. 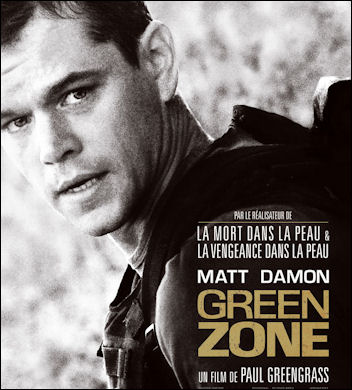 It wasn’t our idea. We just tried to make the best of a bad situation. This sucker should have cost $40 or $50 million, all in. If Universal had any cojones it would have told Damon and Greengrass’s agents to shove their quotes up their asses. Iraq movies are Kavorkian injections. If you’re going to make one, you have to do it super-cheap. It shouldn’t cost any more than what Hurt Locker cost, if that. How did this elemental reality escape Schmuger and Linde’s attention? Beats us, but we didn’t start the fire, okay?

“Well, soon enough, this guy found himself into a tight place, so he opened the first letter. Which said ‘Blame everything on me.’ So he blames the old man and it worked like a charm. Then he got himself into a second situation he couldn’t get out of, and he opened the second letter. It said, ‘Sit down and write two letters.'”