“It’s mind-boggling that one freakish American election, resulting in a presidency that a majority of Americans never wanted, could do so much damage not just to the United States but also to the global order that the United States created in the wake of World War II. But Germans know as well as anyone the havoc a single demagogue can wreak when the forces of decency are exhausted and unsure of themselves, and they can’t help seeing Trump through the lens of their own hideous history.”

Klaus Scharioth, who served as Germany’s ambassador to the United States during the Dubya and Obama administrations: “When I talked to my American friends in 2016, I always reminded them of what happened in Europe. Nobody thought in the early 1920s that Italy would become a dictatorship. Nobody thought that Germany, supposed a quite cultured nation, would get rid of democracy in a very short time. Maybe when you have this European experience, you might be more pessimistic than others.” — from 7.13 N.Y. Times opinion column, “Evil Has Won — Pro-American Germans feel betrayed,” by Michelle Goldberg. 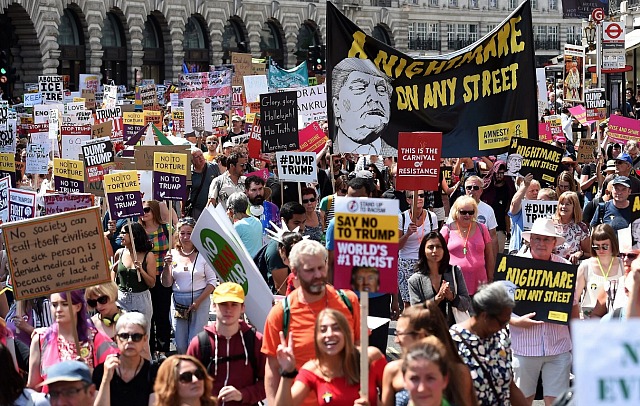 From Variety summary: “Tens of thousands of protesters marched in London on Friday against Donald Trump’s visit to Britain, in one of the largest demonstrations seen anywhere outside the U.S. against the sitting president. Marchers who started gathering Friday morning hoisted placards condemning Trump as a sexist and a racist, banged pots and pans, and chanted in anger. One sign proclaimed ‘Super callous fragile racist sexist nasty POTUS.’ By mid-afternoon, protesters who snaked their way through some of London’s most famous streets began converging on Trafalgar Square in the heart of the British capital.

“A much-ballyhooed balloon of Trump as a snarling baby in diapers flew over the houses of Parliament for a couple of hours Friday morning, with hundreds of people cheering as it floated upward and organizers hoping to bring it to other stops on Trump’s tour of Britain, especially Turnberry in Scotland, where he will play golf at his resort Saturday.”