A whole lotta people were lined up at the Universal Studios 18-plex last night to get into three screenings of Superman Returns, the big draw being the IMAX 3D presentation at 10:30 pm. I saw the throngs as I came out of a Supie-3D 7 pm show, and I stopped and took a few blurry-ass photos. The after-effect was such that I forgot to set the camera to auto-focus. 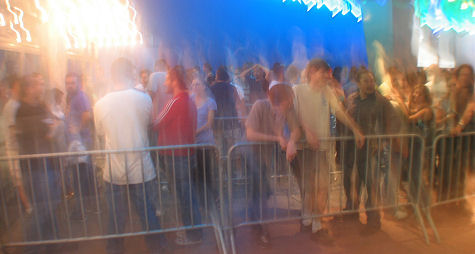 As I was doing this, however, I was indulging in my usual-usual — i.e. having second thoughts after a second viewing. And I’m now persuaded that Superman Returns should have been shorter. A really fine editor could go to work on it and (just spitballing) get it down to two hours and 15 minutes, say, or maybe a wee bit shorter with a thousand tiny cuts.
The spiritual current in this film is still, for me, wondrous and profound — Superman Returns is The Passion of the Christ for non-Christians. And the bring-it-home sequences — i.e., the ones involving disaster, rescue and redemption — are no less jaw-dropping, and each and every second of Brandon Routh tearing through the clouds and the heavens is spectacular. But the pace could be picked up…it really could. It didn’t seem labored when I saw it the first time, but last night it did here and there.
Not to the degree that it’s a major problem, but…well, put it this way. When the big-growing-Krypton-island sequence began, with those wretchedly ugly rock-spires starting to emerge through the waves, I started muttering to myself, somewhat fatigued, “All right…here we go again.” But not long after came the fantabulous 3D version of the scene in which Superman rescues Lois and family aboard Luthor’s sinking yacht, and everything was right again.

If only Singer had done what every good tree-trimmer does before finishing the job — if he had grimmed up and lashed himself with birch branches and said, “Okay, now comes the really hard part” and been a man’s man and gone back into the editing room and taken out the orange hand-snippers and started to shave little bits here and there…he could have delivered a film that would feel a little bit tighter and righter to guys like myself.
Spoiler alert…!!
Otherwise it’s a kind of gem, although to understand this you have to get that it’s primarily about the current within. Anyone saying they didn’t get enough of a sense of fun or frolic from this movie is missing that. Superman Returns isn’t “like” a church service — it is one.
Anyone bitching about Clark’s lack of loyalty and supportiveness for Lois (i.e., getting her pregnant and then disappearing for five years) and being a no-account absentee dad (which he is) doesn’t get what’s going on either. Did you ever hear any New Testament scholars dishing critiques about Yeshua’s not being more attentive to the ladies, or not getting married, or not being a more dutiful son to Mary?
I can sympathize with those complaining that Superman shouldn’t be able to carry that rocky land mass out into space because it’s laced with Kryptonite and therefore he shouldn’t have the strength, but I saw this as an act of will, devotion and self-sacrifice first and super-human strength and Kryptonite-vulnerablity second. Besides, the act obviously brings Superman to the brink of death…or perhaps to death itself. 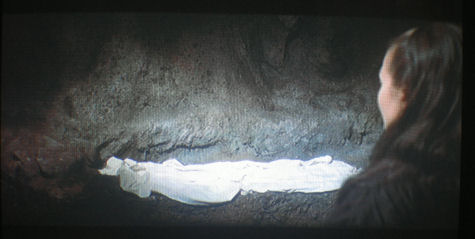 And I love, love, love the scene at the very end in which the nurse comes into the hospital room and finds only an empty bed and rumpled sheets.