I’ve received some private emails over the last couple of weeks about the Harvey Weinstein endorsement (“Jeff is sometimes full of passion for the uncommercial stuff”) that flashes on and off inside the HE logo. It’s been there since ’06 or thereabouts. This morning another such note arrived, this time from a guy named Steve. “I’ve been a constant reader of yours for over 15 years,” it read. “Just wondering whether it’s time for you to remove the Harvey quote from your rolling masthead.”

My reply: “Yeah, I should probably eliminate Harvey, all things considered. On a certain level I feel like a fair-weather rat leaving a sinking ship, but I’d feel like a worse rat — an inhuman one, I mean — if I kept it there. Who are we if we don’t embrace kindness, compassion and respect for each other? Thanks for nudging me about this.”

I asked HE tech guy Dominic Eardley to deep-six the Weinstein thing, and five minutes later it was done.

Sidenote: At the very end of Vincent Minnelli‘s The Bad and the Beautiful (’52) Lana Turner, Barry Sullivan and Dick Powell are listening with heightened interest to a producer they deeply despise, Kirk Douglas‘s Jonathan Shields, talk about his latest movie idea. The message rings true — sometimes vital filmmaking passion doesn’t necessarily emanate from the nicest people.

In the same light I wonder how indie cinema will fare without the “good” Harvey around to champion and aggressively sell the more artistically daring, less commercial projects. As Walter Pidgeon‘s Harry Pebbel said at the end of The Bad and the Beautiful, “You have to give the devil his due.” For all his abominable attitudes about women HW injected a shot of energy into the indie filmmaking scene that a lot of people admired and in many instances benefitted from. He’s history now and may even wind up in jail before this is over, but…well, I’ve said it. 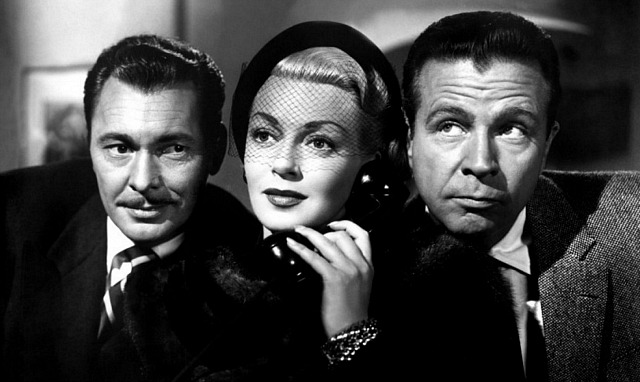