Wednesday, 5.14 update: Johar Bendjelloul, the brother of deceased documentary director Malik Bendjelloul, whose body was found yesterday in Stockholm, has reportedly told Aftonbladet, a Swedish newspaper, that Malik’s death was due to suicide. He added that his brother had “struggled with depression.” 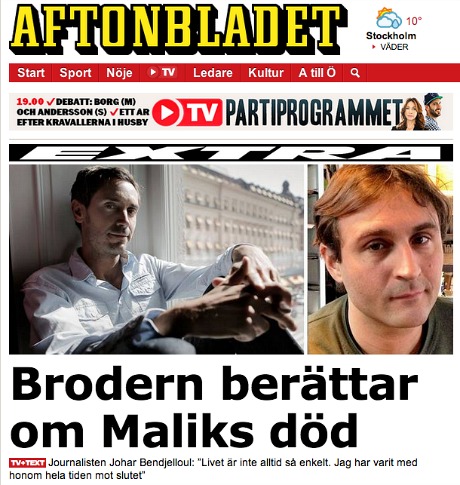 Earlier: During the January 2012 Sundance Film Festival I chatted with Searching for Sugar Man director Malik Bendjelloul, although I’ve forgotten exactly under what circumstance. (It wasn’t during an interview but a social event of some kind.) I remember very clearly that he was a very nice, open and likable guy. 13 months later Sugar Man won the Best Feature Documentary Oscar, and Bendjelloul (along with producer Simon Chinn) strode to the mike and offered a gracious thanks. And now, 15 months after that triumph, the 36 year-old Bendjelloul has been found dead in Stockholm. No cause of death has been reported, but “local police told the newspaper Expressen that it was not being treated as suspicious.” Well, I’m suspicious. 36 year-old guys don’t just keel over. Obviously something happened. Condolences to friends, colleagues, admirers.

May 13, 2014by Jeffrey Wells7 Comments
« Previous post
Gathering of Hotshots
Next post »
Night Used to Have Something