Hollywood & Fine‘s Marshall Fine is an Inglourious Basterds fan because he basically sees it as a delicious suspense film. And he’s right to the extent that the best pop-through scenes convey a sense of impending violence that is drawn out over several minutes, hence the growing suspense. (As before, all spoiler whiners are advised to stop reading at this stage.) 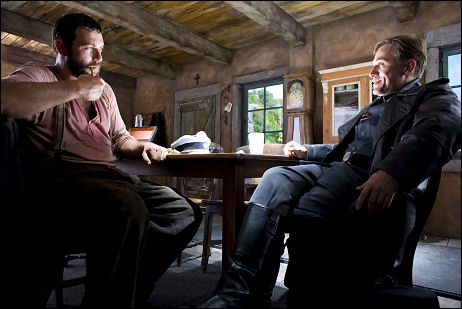 Except these money scenes all involve a suspicious and well-spoken German officer, and deliver the same three elements. One, the German has sniffed out a secret that an anti-Nazi character is trying to keep hidden. Two, he begins to voice his suspicions ad infinitum. And three, he suggests with increasing Tarantino-ish panache that he’s might well bust or kill that person for keeping this secret and being in league with anti-Nazi forces.

As I recall this happens four times in the film, and three of these times with Christoph Waltz‘s Col. Hans Landa in charge of the verbal games. The one time he’s doesn’t do this is during a scene in a cellar-level French bar, but the German officer who handles the honors is a Landa stand-in — less humor and banter but with similar inflections and insinuations, like a cat playing with a mouse before killing and eating it.

The first interrogation between Landa and a French farmer is the best scene in the film because it comes at the very beginning and is therefore a fresh and alarming (and very nicely written) thing to grapple with. But the second time it happens you’re going, “Oh, this again.” And the third and fourth time it’s like “again? How many times is Quentin going to repeat this bit?”

“What Tarantino understands is that the key ingredient in a thriller – the thrill, if you will – is the suspense, not the payoff,” writes Fine. “Sure, in any work built on a tension/release model, the release feels good – but it’s the tension that thrills you, that makes you squirm and feel totally alive to the moment.

“That’s why the saying goes, ‘The suspense is killing me.’ It’s the anticipation that makes every nerve jangle, not the catharsis.

“And that’s what the cagey, canny Tarantino has done with Inglourious Basterds, his most accomplished, crazily entertaining film yet: He’s created a series of scenes of unbearable, exquisite tension. He positively luxuriates in suspense — just before he hits the release and lets the screen explode with gunfire and other pyrotechnics.

“It’s as if the five acts into which this film is divided are each a big bomb with a long fuse. Early on in each act, he lights that fuse, then lets the audience simmer in the suspense he creates, even as they wonder how much longer before the burning fuse reaches the dynamite.”

The problem is that it’s basically the same bomb and the same fuse, five times over.