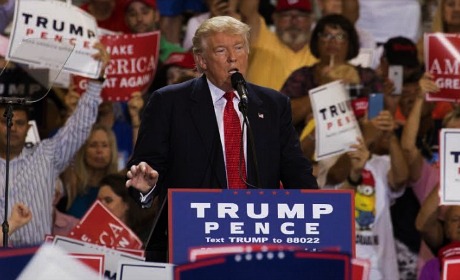 I’m also disturbed by the phrase “greatest political upset of all time,” which suggests that the filmmakers believe there’s something kinda great (i.e., stupendous, awesome, wowser, impressive) about Trump’s phenomenal success. New Yorker editor David Remnick, to name but one, regards Trump’s victory is “an American tragedy,” which of course is roughly synonymous with catastrophic, horrorshow, a huge step backward — a view that is shared by quite a few people in the liberal, centrist and even conservative camps.

When I mentioned this concern to Russell Posternak, who’s working on the doc’s behalf for the Manhattan-based Daniels-Murphy Communications, he answered that “in the context of the title, ‘greatest’ mostly just means [an] unexpected upset.” Something deserving of a “holy shit” response, he meant. Nope — “greatest” is a term of admiration or celebration. When someone calls this or that undertaking “a great feat” the implication is obviously one of respect and positivity. When Cecil B. DeMille called his 1952 film The Greatest Show On Earth, the implication was clearly that the circus show in question (i.e., the one run by Charlton Heston) was an exciting, stupendous sight to behold.

“This not a rightwing or leftwing doc,” Postnerak insisted. “It presents a behind-the-scenes view into the machinations of the Trump campaign and allows viewers to form their own judgements.”