This is a very old and creaky thing to say, but one thing you’ll never hear an actor or actress say is, “I did this film because I was offered a lot of money and I never had a shot at any hefty straight-paycheck roles until I won the Oscar, and my agent said to me, as I’m sure all agents say to all Oscar- winning actor clients, ‘Now’s the time to cash in. 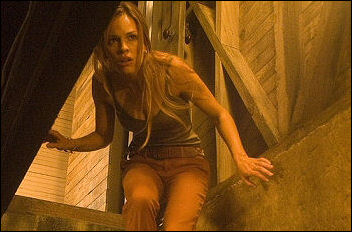 “‘Popularity is promised to no actor,’ he said. ‘Memories are short and windows of opportunity are small, so get it while you can.’ So I got it. Took it, I mean.

“We all know what kind of film this is. It’s a slick piece of pandering pseudo- religious crap. But there’s a way to talk positively and enthusiastically about it — have you heard the b.s. I’ve been slinging with interviewers? And don’t get all judgmental. Not everything you do in life can be Boys Don’t Cry or Milliion Dollar Baby. Sometimes you take the paycheck because the script’s not too bad and the dialogue is decently written and the price is right.

“So you just hold your nose and jump in and do your best while developing your own stuff as best you can, and you hope that it won’t be too long before you get lucky again. But if you want to live well you had to be well paid, and we all know what that occasionally entails.”

Does that sound weird or grasping? Not to me, it doesn’t. Sometimes you take a job because it seems like a good way to go at the time, given what you;re looking to achieve.