“Never forget, never forgive”? A slouching Johnny Depp in striped pants and a shock of white hair with a big straight razor? Tim Burton doing his usual indulgent production-design wallow with cooler-than-cool photography? Is this anyone’s idea of a likable slogan and an enticing “key” image for a big-studio, gotta-see-it, end-of-the-year musical? 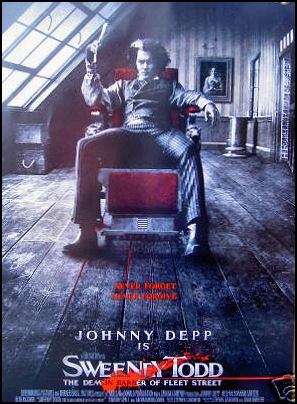 I’ve seen Sweeney Todd twice on stage and enjoyed it greatly both times — it’s a brilliant work — but there’s something about the energy and attitude that this DreamWorks-funded film (opening 12.21.07) is putting out that I don’t much care for. Call me nuts, but this is translating into (I’m admitting it) a donkey-like resis- tance to the film, sight unseen. I’m not saying I can “tell” anything. Obviously I’m clueless about how the movie plays. Completely. I’m just being honest. Something about this film is dislikable.
I can’t quite figure what this is about except for my belief that Burton is over. Well, isn’t he? His last half-decent film was Sleepy Hollow, and that was eight years ago — two or three zeitgeists have come and gone since then. The appalling Planet of the Apes was the first harbinger of the downturn, Big Fish was under- whelming at best (it certainly didn’t come together emotionally), and if you ask me Charlie and the Chocolate Factory was poison. I’ve done no calling around, but something tells me others may be feeling the same way.
Every now and then an audacious, high-profile, summer or year-end movie gets beaten up and slapped around by everyone (straight press, bloggers, critics), and something’s telling me that Sweeney Todd is shaping up to be one of those punching bags — the Munich of musicals. I’m not trying to be a jerkwad. I’d seriously like to be wrong. I’d love to see Sweeney Todd work as a film musical. I’d like to see Burton come back. I’m just saying that three and half months out, something feels twitchy…not right.
This piece was triggered by a snap of a Sweeney Todd one- sheet that I received today. There’s no poster art sitting on the official website. I’ll admit that David Poland got me going about Sweeney Todd way back when he predicted last February that Depp “is a 95% bet to be nominated for Best Actor” for his lead performance in Burton’s film, but that was then and this is now.