I was stuck on a really long (eight and a half hour), occasionally miserable Amtrak train trip earlier today from Toronto to Syracuse, N.Y. The purpose was to visit my son Jett , 18, who started freshman classes here a week ago. I’d forgotten about the intense squalor of freshman dorm life — the constant aroma of leftover pizza, the pizza take-out boxes and empty bags of chips scattered about, the leftover chicken-wing bones on the floor, the communal bathrooms, the stanky T-shirts and grubby socks and athletic shorts on the floor, the general pig-trough vibe. 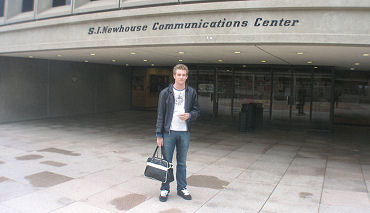 Saturday, 9.2.06, 6:45 pm — notice the incongruent “S” letter in the the “S.I. Newhouse Communications Center” banner over the main doorway. The original “S” was lost and the school replaced it, but the replacement letter uses the wrong font. Tens of millions being spent at this university and they get somehting like this wrong. It’s like wearing a perfect $750 Italian suit with one of the buttons being the wrong color.

It was raining hard for three or four hours during the train trip, and the roof of the car I was sitting in was leaking water in six or seven different spots. Hang in there, Amtrak! The U.S. border police stopped the train to check passports, etc. (which is normal) but they kept everyone waiting for an hour and 45 minutes (which is bullshit). The food car sold bad coffee, cheese danishes, chips, shit sandwiches and the like. Bored-out-of-their-minds passengers were lined up all through the trip.
The trip kept me out of internet reach from 7:45 am until 6 pm and when I finally arrived I didn’t feel like jumping online because every now and then life is about something other than jumping online. (I was tempted to write a measured response to David Poland‘s rave review of Stephen Frears’ The Queen but I guess I can wait.) I just wanted to hang and talk and roam the campus and take pictures.
Last night Jett and I ate some truly foul pizza at one of the joints on Marshall Street, and I mean pizza so bad that that the Food and Drug Adminstration agents should be called in to make arrests.