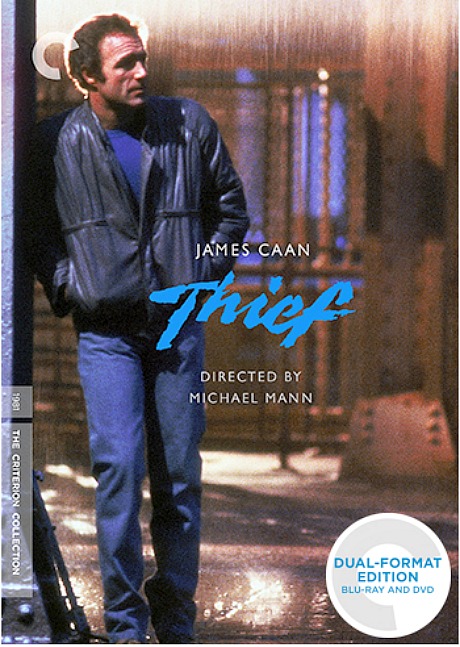 Wiki #1: “James Caan‘s emotional several-minute monologue with Tuesday Weld in a coffee shop is often cited as the film’s high point, and Caan has long considered the scene his favorite of his career.” Wiki #2: “Caan liked the movie although he found the part challenging to play. ‘I like to be emotionally available but this guy is available to nothing,’ he said.” Wiki #3: “Thief showcases many of the cinematic techniques that would become Mann’s trademarks in the years to come. The film also earns plaudits for its meticulous attention to detail: the tools and techniques of the trade, right down to the oxy lance used to penetrate a safe, are authentic, the result of Mann’s decision to hire real-life thieves to serve as technical advisers. Wiki #4: “Thief marks the first film appearance of veteran actors Dennis Farina, William Petersen, James Belushi and Robert Prosky. At the time a Chicago police officer, Farina appears as a henchman. Petersen, who later would star in the Mann film Manhunter, appears briefly as a bouncer at a club; Wiki #5: “Originally titled Violent Streets, the film debuted at the 34th Cannes Film Festival. It went on to open in theaters in the United States on March 27, 1981, earning a modest $4.3 million. While not a financial success in its initial release, the film has become a reference point in Mann’s career, especially with the release of his crime epic, Heat, with which this movie has many similarities.”

It’s almost hard to believe that this landmark crime noir was produced by Jerry Bruckheimer, who was a whole ‘nother operator back in the ’80s and ’90s, especially during and immediately after his partnership with Don Simpson. I was especially taken with that mid to late ’90s period when JB produced a series of smart macho steak movies (Crimson Tide, Con Air, etc.) Then he got into that lucrative but less honorable vein of family fare, TV series, those godawful Pirates films and The Lone Ranger.