David Dobkin‘s The Change-Up (Universal, 8.5), an allegedly raunchy body-switch comedy starring Ryan Reynolds and Jason Bateman, is having a big Westwood premiere tonight. The trailer has me scared because it has Bateman and Reynolds shouting “aaahhh!” when they realize they’re no longer themselves and have switched lives. It also implies that the film likes poo-poo and pee-pee humor, and that’s not good either. Plus I don’t like gags about guys getting all frazzled trying to take care of wailing babies. I’m just being honest. 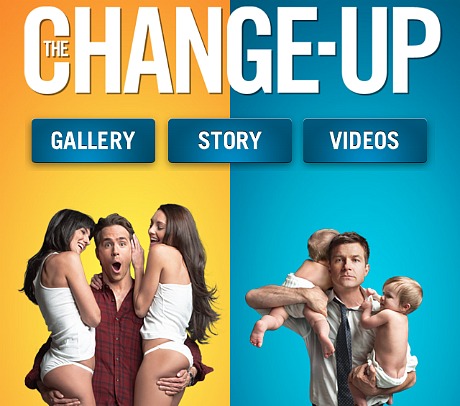 It’s not funny when actors go “aaaahhh!”….ever. If you play a part in a big-studio comedy and you do an “aaahhh!, you’ve soiled your reputation for life. Would Jeremy Irons do an “aaahhh!”? Would Peter Finch, Cary Grant, Ronald Colman, Charles Laughton, Laurence Olivier, George Arliss, Spencer Tracy, Errol Flynn or Van Johnson do one? What kind of moron do you have to be to even snicker at an “aaahhh!” moment, much less laugh at one?

If I was a studio head I would say to every director making a big-budget comedy on my lot, “If you put an ‘aaahhh!’ bit into your film, I will not only fine you $50,000 but I will surreptitiously hire guys to break some of your bones — your choice.”

I’ll tell you what. If nobody goes “aaahhh!” in The Change-Up, I’ll go easy. Maybe the “aaahhh!” bits didn’t make the final cut, I mean, and they were just used for the trailer.

After The Wedding Crashers I thought Dobkin was some kind of genius. I thought he might be Judd Apatow 2. There were no “aaahhh!” bits in that film, for one thing. The writing was too good. Then he exec produced Mr. Woodcock and directed Fred Claus, the Vince Vaughn comedy. “Jesus, how could the guy who directed The Wedding Crashers direct Fred Claus?,” I asked myself. Now I’m thinking that Dobkin is just another highly proficient pro-for-hire like Shawn Levy, Dennis Dugan and Peter Segal.

On top of which The Change-Up was penned by Jon Lucas and Scott Moore, who did The Hangover and The Hangover, Part II. That also scares me. I’m also scared of the possible influences from producer Neal Moritz (Fast & Furious, Click)

Three months ago I wrote that “there’s a brief segment in Woody Allen‘s Husbands and Wives in which Allen’s character reads a short story about a champagne-sipping womanizer envying the married guy who lives down the hallway, and vice versa. The Change-Up is a feature-length riff on this idea, goaded by a supernatural premise.

“I used to ask myself if Ryan Reynolds will ever topline a really well-made commercial mainstream movie. Not a pretty good one like The Proposal or an interesting but unsatisfying indie-exercise pic like Buried, but a sharp, snappy, laugh-out-loud exception on the level of Dobkin’s The Wedding Crashers. Will it ever happen?”

August 1, 2011by Jeffrey Wells99 Comments
« Previous post
"Prostitutes Who Know How To Sail"
Next post »
Oscar Numbers for Dumb Bunnies