“One of the great weapons any interviewer has is his enigmaticness,” Frank Langella said during our chat last Thursday. I wasn’t being very enigmatic myself, I’m afraid, as I kept trying to get Langella to draw comparisons between Richard Nixon, whom he plays so expertly and cagily (and with such empathy) in Ron Howard‘s Frost/Nixon, and George Bush. But Langella wouldn’t bite. 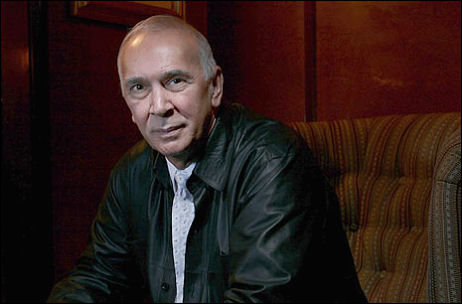 Even about whether Bush has the character to someday say “I let the country down” regarding the lies that he and his neocon cronies used to put us into the Iraq War. Nor could I persuade Langella to comment on Chris Wallace‘s reported statement that Bush is nowhere near as bad as Nixon, who, Wallace feels, was motivated solely by selfish motives, whereas Bush was trying to protect his country from terror.

So I just asked this and that and we just danced around, Frank and I. He’s quite the kindly, elegant and settled-down fellow. Very soft-spoken, very polite. Tends to say less rather than more. Here‘s the mp3.

Langella’s stage-bound Nixon won a Tony award, and he will most likely land a Best Actor nomination for his current screen portrayal, althoughit must be said that Sean Penn ‘s performance in Milk, to go by the critics groups so far, seems to be enjoying the favoring winds.

Langella’s final performance as Sir Thomas More in the Broadway revival of Robert Bolt‘s A Man For All Seasons was last Sunday. When we spoke he was looking at four or five more performances. How did that feel? “Do you remember what you were like when you were in school and watching the clock reach a quarter to three?,” he said.