There’s a kind of nascent rumble on Talledega Nights (Columbia, 8.4), which has its all-media showing in Westwood this evening: Will Ferrell‘s dumb race-car driver schtick is whatever it is (funny, very funny, amusing, vaguely exasperating), but the supporting stand-out seems to be Sascha Baron Cohen, whose comedic Borat (subtitled “Cultural Learnings of America for Make Benefit Glorious Nation of Kazakhstan”) played in Cannes last May and is opening on 11.3 via 20th Century Fox. 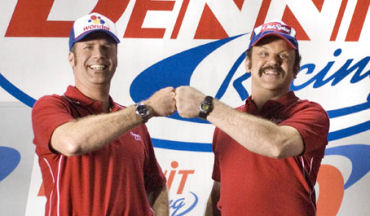 “On many levels, Talladega Nights is reminiscent of Anchorman,” says Screen Daily‘s Tim Grierson. “Both films were directed by Adam McKay, both were written by McKay and Ferrell, and both feature Ferrell playing a pompous big shot cut down to size who ultimately finds redemption. If those comparisons aren’t enough, each project lovingly satirises its milieu while relying on over-the-top characterizations and hit-and-miss improvised humor for its laughs.”
And yet there are “many good comic moments early on,” he says, which is good because they “help to compensate for a sluggish second half.”
And it’s Baron Cohen, playing an effete French snob, “who gives the film acceleration,” Grierson writes. “As a testament to Baron Cohen’s importance to Talladega Nights, the film’s second-half dip can be partly blamed on his disappearance from the plot as Ricky withdraws from the limelight to regain his confidence before the big third-act race.”