Red Carpet District‘s…I mean, In Contention‘s Kris Tapley has dinged Rob Reiner‘s The Bucket List by calling it “a heavy layer of schmaltz that doesn’t settle into anything that feels genuine or ultimately enjoyable, given the potential in front of the camera.” 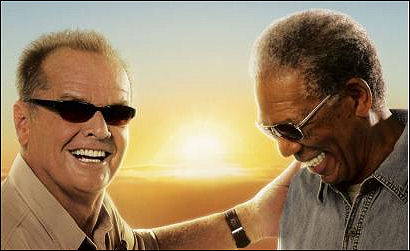 My God…Reiner dishing schmaltz? Doesn’t calculate. I need to step outside and take a walk and kick this around.

“I’m not going to offer a full pan of the film, because it doesn’t really deserve that,” Tapley goes on. “Its heart is in the right place and it should be a fun film for families to enjoy over the holidays, but give Justin Zackham‘s script over to one of the industry’s many gifted ‘doctors’ and [Reiner] might have ended up with something of substance.

“Morgan Freeman is business as usual. Jack Nicholson touches this or that unique note, but mainly it’s just Jack being Jack. And it isn’t the awards-caliber Jack we wouldn’t have been out of bounds to expect. It’s just not that kind of film. It’s not in [the film’s] DNA to rise above a certain level of mere acceptance. But sometimes that’s enough for a casual moviegoer, and so I’m sure The Bucket List will find an audience.”