New York/Vulture is throwing itself a Hollywood shindig on Thursday, 12.8, at the Sunset Tower Hotel. Many of the Oscar contenders will be there “to celebrate the launch of New York‘s first-ever Oscars issue,” the invite reads. But I was a bit surprised to read that the evening will be hosted by CEO Pam Wasserstein, publisher Larry Burstein, editor-in-chief Adam Moss, culture editor Lane Brown, editorial director Neil Janowitz and Hollywood editor Stacey Wilson Hunt. These five are cool, hard-working team players but what about Vulture columnist Kyle Buchanan? He’s the Vulture presence out here, the award-season blogaroo, the guy everyone knows and reads and says hello to at screenings, etc. It’s not a huge deal that Buchanan isn’t named as a co-hoster, but it does feel curious. 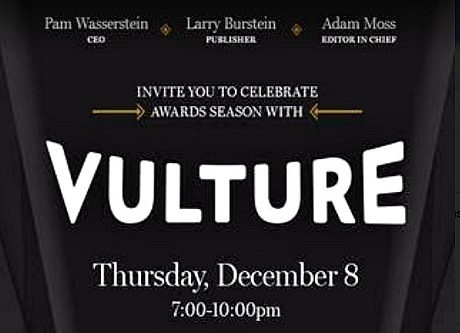 November 28, 2016by Jeffrey Wells2 Comments
« Previous post
The Resistible Rise of Arturo Ui
Next post »
All Mood Pockets Must Pass