How Do You Feel

15 months after debuting at the 2017 Sundance Film Festival, Andrew Dosonmu‘s Where is Kyra? is opening this Friday (4.6). I’ve been saying all along that it’s “grade A within its realm” and that Michelle Pfeiffer‘s performance is quite the tour de force, but it’s the kind of film that will empty your soul and drain you of any will to live.

I’m not disagreeing with Village Voice critic Bilge Ebiri, whose just-posted article, “Michelle Pfeiffer Gives the Performance of Her Life in Where Is Kyra?“, teems with high praise; I’m saying “yeah, it’s very well made but don’t see it if you’re the type that occasionally thinks about suicide because it’ll push you into the abyss.”

I mentioned this impression to Ebiri this morning, and he replied “good…a movie that can convey the exhaustion and desperation of poverty to that degree is essential, and rare.” Yeah, it conveys that, all right, but I know if I consider this kind of creative deliverance to be “essential.” 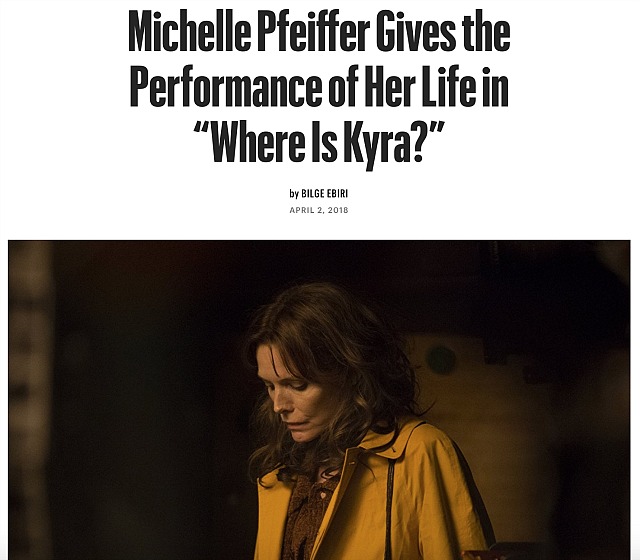 Here’s how Ebiri puts it in his Voice piece: “[Dosunmu] and cinematographer Bradford Young sheathe Kyra in oppressive darkness, and they hold on her for extended periods, even when other characters are speaking or acting. Close-ups often show her half-concealed in the gloom, emerging from pitch-black corners of the screen. No lamp gives off enough light, no street scene is bright enough. A pall has descended over this woman’s life. Rarely on film has the sheer debilitating exhaustion of poverty been conveyed so clearly.”

Here‘s how I put it on 1.24.17: “A funereal quicksand piece about an unemployed middle-aged woman (Pfeiffer) in a terrible financial jam, and about a relationship she has with a fellow down-and-outer (Keifer Sutherland), Where Is Kyra? is a carefully calibrated, well-acted gloomhead flick that feels like it’s happening inside a coffin or crypt.

“This is Dosunmu’s deliberate strategy, of course, but the end-of-the-road, my-life-is-over vibe is primarily manifested by the inky, mineshaft palette of dp Bradford Young — HE’s least favorite cinematographer by a country mile.”

I said on Twitter that “this, right here, is the difference between a regular-guy response” – i.e., my own — “vs. that of an impassioned ivory-tower critic. In addition to the usual-usual (i.e., how adult and well-painted and uniform it all is) I’m conveying how Where Is Kyra? made me FEEL whereas most critics studiously avoid emotional responses in their assessments.” To which Ebiri replied, “Dude, this is how the film made me feel! I’m not sure what you’re getting at here, Mr. Voice of the People.”

What I’m getting at is that Ebiri seems to be so out of touch with any sort of common-man, LexG-like gut feelings and is so tethered to the winged pigs of the academically and scholastically correct art-film rules of 2018 that…I don’t want to presume any motives, but for any human being with any sense of the occasional cruelty of random fate and the various shades of darkness that lurk in every corner in every pocket of the universe, Where Is Kyra? is pure liquid hemlock.

Ebiri is correct (or at least isn’t incorrect) in praising the chops that went into Where Is Kyra?, but my God, man, who could love a film like this? We’re only here for 80 or 90 years and then we’re fucking dead, and Bilge Ebiri wants you to feel the dull horror and desperation of poverty because…what, it’s good for moviegoers to suffer in darkness as heavily or deeply as they’ve suffered in real life? Because it builds character or something?

Okay, Bilge is right — go see Where Is Kyra? this weekend, and after you’ve seen it and thought it through and recovered, come back and describe how your insides felt as you watched, and whether you felt enhanced or diminished by taking a trip with poor doomed Kyra down her aching lonesome road.

Right now Where Is Kyra? has an 82% Rotten Tomatoes rating, and a 73% on Metacritic. 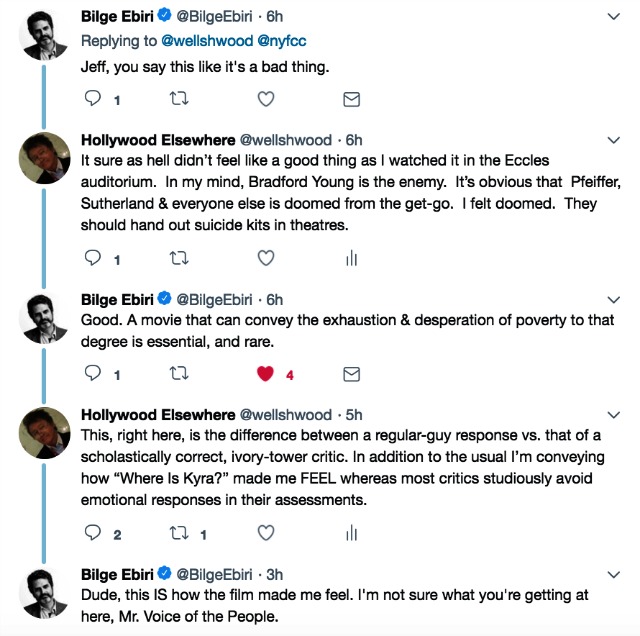