I’ve always loved this photo of WNBC newsman Gabe Pressman listening to the Beatles during their first-ever U.S. press conference, minutes after they landed at JFK airport on 2.7.64. Here, in a nutshell, is the great hair gulf between generations — the 39 year-old Pressman, a WWII veteran and very much a Brylcream man, pondering a new wave of longish, non-Brylcreamed hair as the world turns and a new chapter begins. Anyone who grew up in the tri-state area in the ’60s and ’70s remembers Pressman — hard-nut TV street reporter, always with the mike, more than 60 years on the beat. He began in the mid ’50s and never retired. Wiki excerpt: “Until the very end, Pressman worked part-time at WNBC, mostly as a blog writer about New York City news on the station’s website. He was [also] active on Twitter. In 2014, he stated that an arthritic knee kept him from chasing stories like he used to. A few months before his death, Pressman covered the annual Saint Patrick’s Day Parade in New York.” 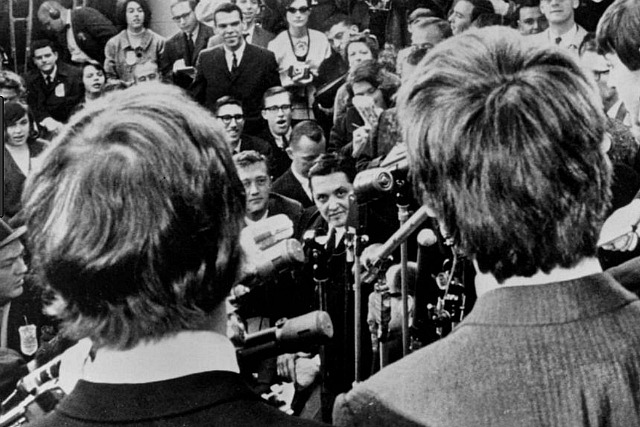