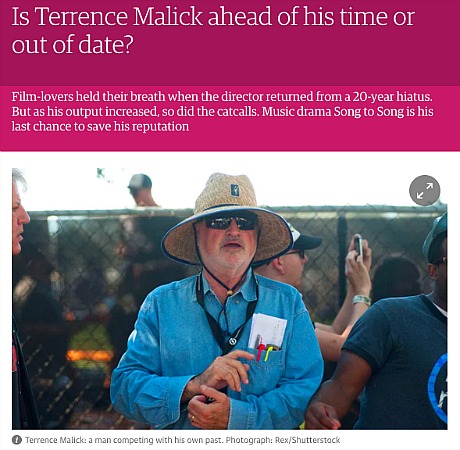 “Laggers,” posted on 4.15.14: “The flakiest, most whimsical director in the history of commercial cinema.”

“Be Honest,” posted on 9.9.16. “God rest his gentle soul but Malick is finished. He’s airy-fairy’ed himself into oblivion.”

“What’s My Interest In Seeing Terrence Malick’s Voyage of Time? No More Than Slight,” posted on 5.3.16: “Malick is more or less over now — To The Wonder and Knight of Cups have all but seen to that. Song to Song, which I’m very reluctant to see, is probably superfluous at this stage. Nobody much cares. I certainly don’t. His brand has certainly waned across the board.”