“It doesn’t have the old-world glamour of Cannes, the international marketplace hagglings at Toronto or Berlin, the late-night frenzied dealings and celebrity swagfest of Sundance or the elegant prestige found at Lincoln Center. It hasn’t even had a central location, what with theaters all over the city hosting screenings, and downtown itself a strange labyrinth of high-end restaurants and hotels.
“What Tribeca has had is a lot: hundreds of films; paparazzi-lined Hollywood-style premieres; family film and ESPN sports-themed programming; artist round-table discussions; outdoor ‘drive-in’ screenings; concerts; and audience-participatory events. (This year, director John Landis will host a 25th-anniversary screening of the epic video for Michael Jackson‘s Thriller, where audiences are invited to ‘learn the Thriller dance,’ get zombie-fied at a Thriller face-painting station, compete in a Michael Jackson look-alike contest or boogie at the Solid Gold Dance party.)
“Given the overwhelming confusion of choices (for the Thriller video alone, four separate activities?), Tribeca has consistently faced cries of complaint: It’s unmanageable, the venues are all over the place, ticket prices are too high, it doesn’t generate the kind of sales that make Variety headlines, it’s just too much. At seven years old, it’s time to ask: Can Tribeca grow up?
“‘I read somewhere that in New York the default mode is complaint,’ said Tribeca Film Festival artistic director Peter Scarlet. 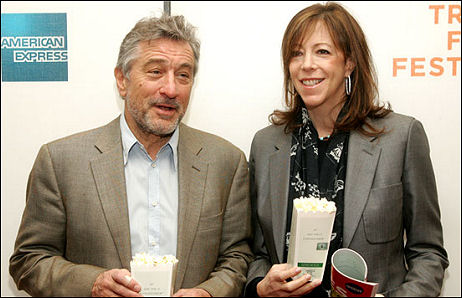 “When the New York Film Festival started in 1963, he pointed out, the New York press responded with a “reaction of distaste mixed with horror, not unlike that you saw with ’50s sci-fi movies when something landed from another galaxy. But gradually, humans being what they are, and the New York Film Festival being what it is — a pretty terrific film festival — New Yorkers actually relaxed their sphincters and got used to it. Now it’s an accepted part of the cultural fabric of New York.
“‘And then this other monster called Tribeca came along seven years ago and it was like, `Oh my God it’s so big!’ Which seems kind of ridiculous because New York is the town of everything bigger than everything else. I mean, nobody complained that the Empire State Building is too tall.’
“That’s true,” says Vilkomerson, “because the Empire State Building’s height is what allows us all to appreciate it. Tribeca has faced the opposite problem, being so big as to be impossible to appreciate.
“‘Everyone has their opinion,’ said Tribeca’s director of programming, David Kwok. ‘”I think when you come so strongly out of the gate, people want to criticize or have their own perspective of how it should be. Especially when it’s new. It’s almost natural instinct for some people — it’s easier to take a jab than to look at the positives. Whether it’s fair or not is not for me to say.’
“As one industry insider put it, ‘They’re a film festival on the defensive.'”