The new Film Society of Lincoln Center movie theatre on West 65th that nobody will ever remember the name of is opening on June 17th. With presumably state-of-the-art digital sound and projection, and a very fine doc — Andrew Rossi‘s Page One: Inside the N.Y. Times — kicking things off. The smallish twin cinema is being called the Elinor Bunin Munroe Film Center (presumably because Elinor Bunin Munroe made a big contribution to the construction fund). It should be called Film65 or something like that…c’mon. 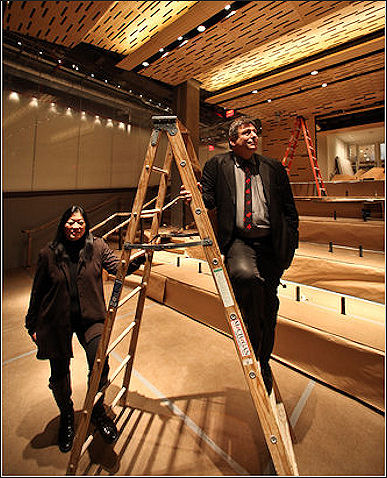 Noting that the theatre’s only competition is the nearby Lincoln Plaza Cinemas complex, on Broadway between 62nd and 63rd Streets, N.Y. Times reporter Larry Talbot quotes film society staff members as saying that “their new venture would complement, rather than compete with, Lincoln Plaza.” Film Society of Lincoln Center program director Richard Pena also claims that “we are not looking to upstage what Dan Talbot does, and in a sense we are building on that….there are many worthy films Dan simply can’t get to even with six screens, films for which we might be able to provide the difference.”

Well, maybe…but I’ve always avoided the Lincoln Plaza and its stuffy, bowling alley-like theatres with too many seats and barely audible sound like the plague. I saw The Ghost Writer at a screening room and loved it, and then dragged Jett to see it at the Lincoln Plaza…and the overall experience was at least 30% or 40% diminished. So if I’m in the area some rainy day and it’s a coin toss about which theatre to attend because they’re both showing good films…no contest.