A Watchmen screening happened last night at L.A.’s AMC Century City plex. Attendees included press (including HFPA), studio folk, friends of studio folk and random-off-the-streeters. It was 20 minutes late starting, but a friend of HE attended and his basic verdict is that Tuesday’s early-bird review was pretty much on point. 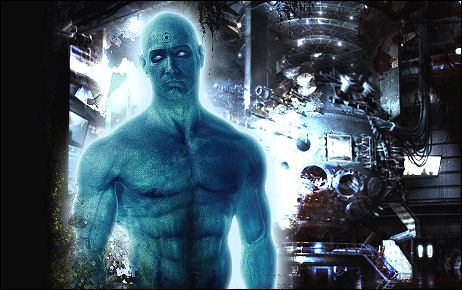 “By far the highlight of the film is the opening credits,” he begins. “It perfectly nails the surrealist tone of the graphic novel and does an adequate job of running through some of the back story of the Watchmen. It’s so good I’m half-convinced that director Zack Snyder had little to do with this sequence. Because that’s where the surrealism ends.

“The rest of Watchmen basically alternates between campy silliness and 2nd-rate comic book melodrama. At some points on the level of live-action Teenage Mutant Ninja Turtles. I assume Snyder was trying to hit that sweet spot of surrealism that accompanies the alternate 1985 reality of the graphic novel, but the kindest thing I can call it is a kind of tragedy/campy combo.

“There’s certainly no sense of tension or release in any of the action sequences. Apparently, that shit is just supposed to look cool.

“Connected to the action is the film’s unexplained pseudo-super powers the Watchmen all seem to have. In the graphic novel, it’s made very explicit that none of them have super powers (except for Dr. Manhattan). And yet Snyder allows them all to jump really high and punch and kick baddies across the rooms, again with lots of whooshing and thudding. Fists and bodies break through walls like action in a Terminator or Superman film. And it’s never explained. 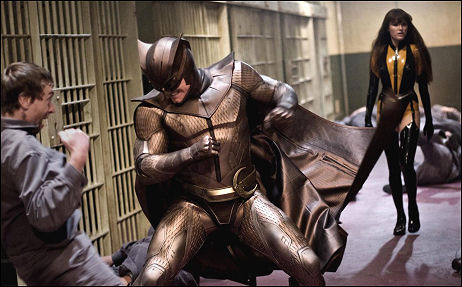 “With the exception of using Bob Dylan during the opening credits, somewhat successfully, the music left me speechless. One bad stick-out is a piece of Hendrix near the final confrontation, which seemed completely misplaced to me. The rest of the music is a smattering of random and very recognizable 80’s pop songs randomly pasted over scenes and scene transitions. It continually takes you out of the story. Really bad stuff.

“As Dr.Manhattan, Billy Crudup refuses to mail it in and Jackie Earle Haley‘s Rorschach is a great presence — one of the few characters/performances with any weight in the film. But Malin Akerman‘s Silk Spectre II is cringe-inducing throughout. Her performance (combined with the music) takes you out of the story at every turn. And you’re going to love the bad Nixon — bad make-up and accent (seriously!). It’s particularly hilarious coming on the heels of the great Frank Langella‘s Frost/Nixon performance.

“The film is probably 90% accurate to the graphic novel, and I’m not sure this is a good thing. Fear of the fanboys may have done them in. With no flexibility to explore the characters and scenes, much of the film is a rote viewing experience. No ramping up or down of character development, suspense or action. It’s simply ‘next’, ‘next’ and ‘next’ — like clicking through a viewfinder.

“Look, the graphic novel has some real thought to it and probably the only positive from the rote almost faithful adaptation was that Snyder wasn’t able to completely remove some of the larger themes embedded within the crazy (sometimes cool) world of the Watchmen. Having read the graphic novel and its disjointed narrative, I understood this was always going to be a difficult adaptation into a cohesive narrative, one that would plant its antagonist flag early on the horizon and then work its way to that mark, but the filmmakers don’t even try here. 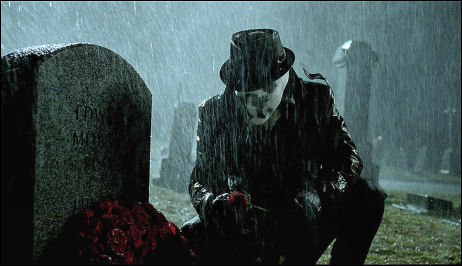 “Nor did they embrace the reflexive joy that can spring forth from a disjointed narrative. There’s some meat on the bone at the end of the film which lends itself to lingering thought (a classic ‘sacrifice the few for the many’ dilemma); yet even this is undercut by a weird final scene between the love interests. Are we supposed to be contemplating this classic dilemma or are we expected to feel warm and fuzzy because Akerman and Patrick Wilson‘s Nite Owl still get to play house?

“There were certainly no cheers at the end. About 80% of the audience rushed out of the theatre the second the credits began; minimal congregating outside. I did come across a group of three 20-something guys, holding their free give-away Watchmen posters, seemingly doing their best to talk themselves into liking the film.

“I almost don’t want to spoil this for you, but there’s a lot of blue penis in this film. Sadly, I’d say this was one of the few surprises and entertaining parts of the entire experience. It’s not everyday that a mainstream Hollywood movie flashes blue Johnson!

“Who am I? A regular moviegoer who sees anywhere between 85 to 100 films per year. I’m down with popcorn fare when it at least tries or knows it’s silly, but I also do my best to seek out foreign and independent fare. I liked the Bourne series, Dark Knight, first two X-Men. However, I hated 300 (a 2-hour long video game-slash-slow motion campfest). I appreciated the Watchmen graphic novel but was ultimately bored by its jagged and stiff storytelling.”